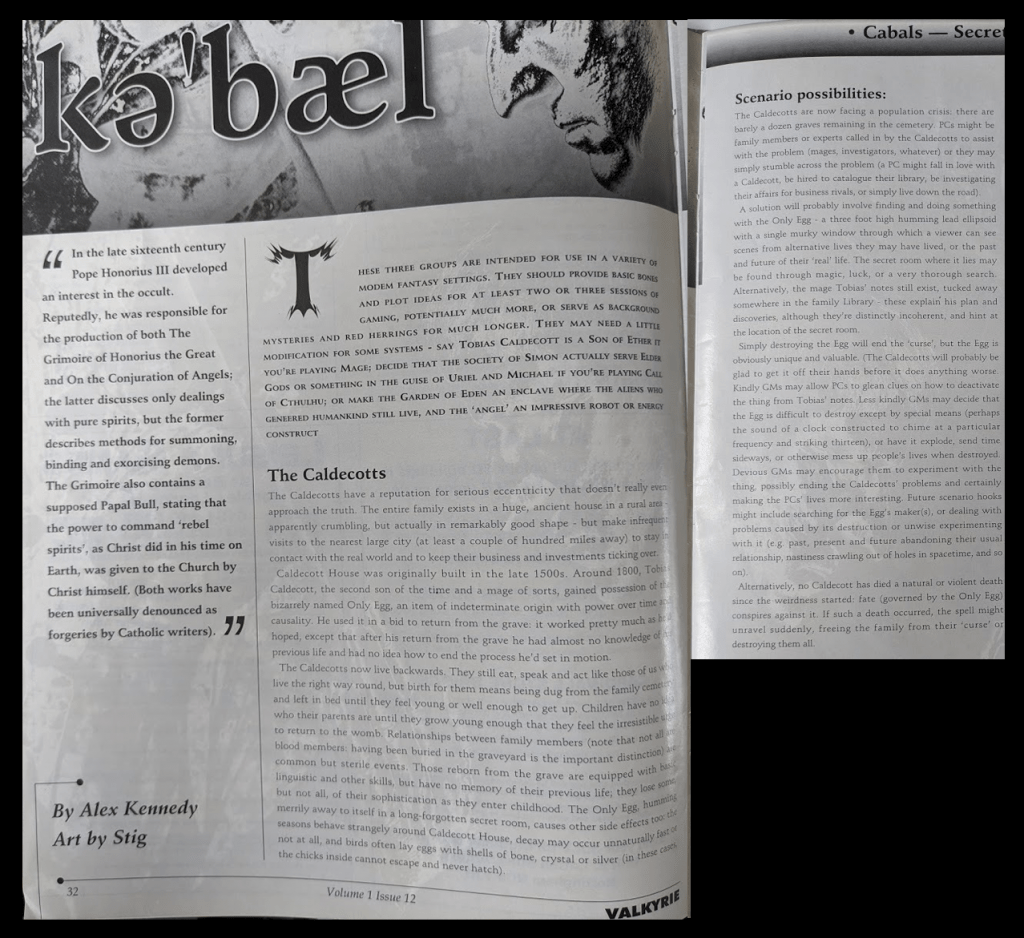 The following is an extract from an article Alexis wrote decades ago, in 1996, for British roleplaying magazine Valkyrie. It’s juvenilia, and some bits make him wince – but it’s an insight into his early style and fiction which later became Fallen London, Sunless Sea and Cultist Simulator. [ Part 1, Part 3 ]

The Denied are a small cult – perhaps two hundred in all, including children – most of whom live in a sizeable but remote village in Kurdistan. They’re notably darker-skinned than most Kurds. This is not surprising, since their ancestors, eight hundred years ago, were Coptic Christians who migrated from Ethiopia, where, according to a number of sources, the Ark of the Covenant lies. The Denied’s ancestors found it there. One brave or foolish man, examining the sacred writings within (that accompany the Commandments) found reference to a wonderful secret – the actual geographic location of the Garden of Eden.

Of course, anyone who pokes blasphemously about in such a holy item cannot expect to profit from his actions. The man led a band of perhaps eighty pilgrims, men and women, to the mountains to the north of Mesopotamia where his painstakingly copied map led him, in an attempt to regain Paradise. Only ten survived, but when they found the narrow pass between two mountains, and breathed the astonishing scents that drifted from it, they thought their journey well worth it. Until of course, the bright angel with the terrible sword denied them entrance.

The group settled in a high pass nearby, scratching a living from the thin soil; for eight hundred years they have tried stealth, persuasion, magic and occasionally, rather messily, violence, to pass the angel, but to no avail. Only the birds may pass – and only true birds, since shapeshifters cannot find their way in or are battered to death by the winds. The wind that blows from the garden carries a special virtue. As a result, the Denied tend to be gifted, long-lived and remarkably healthy. Some of their children leave, deciding later in life that their parents were deluded, or they become agents in cities outside. Those who have not purified themselves in some way cannot find their way to the village unless they have a guide or map – the region is one of those hidden places that somehow aren’t noticed by explorers and surveillance satellites alike.

PCs may be Denied types themselves. In this case, they’ll most likely be exiles or villagers stricken by wanderlust. This, of course, needs to be worked in to the character’s background. If they’re outsiders, they may find a map showing the location of the garden or village or they may be recruited as expert help by another outsider with the map who wants to try to enter the garden. Such attempts will almost certainly fail (albeit in a spectacular and interesting fashion) unless the GM wants PCs to find their way into the garden and eat the fruit of the Tree of Life. Alternatively, the Denied might use the characters to keep outside interests, like marauding journalists or government agencies at bay – with or without telling the PCs what’s really going on.

This group may work best as a background mystery to other events: for example, the PCs may pursue a villain or informant into the mountains, and stumble upon the Denied’s secret. Or they may just be taking advantage of a very unusual tour opportunity…