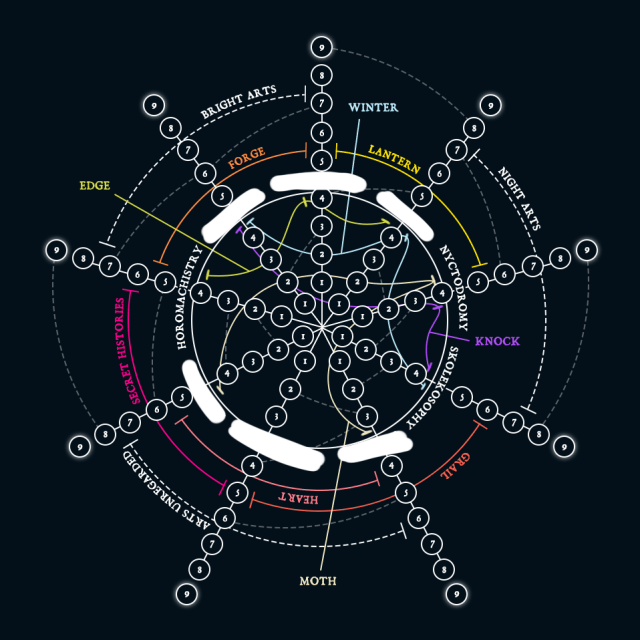 Happy Friday! I left off updates after our big shebang on Cultist‘s anniversary, where we announced The Lady Afterwards, Against Worldbuilding and the Lucid Tarot. So that means we have quite a bit to talk about today.

First things first: we’re 33% off in GOG’s Summer Sale, and today is Stop Cyberbullying Day. Cyberbullying is a cause close to our hearts,
having been on the wrong side of it once. We’re keen to encourage a better understanding of how even benign-seeming interactions on the
internet can contribute to people having a really rubbish time. So we’re #stopcyberbullyingday sponsors, and we’re donating 100% of
Cultist‘s revenue today to CyberSmile, the internet charity behind it all. Please buy Cultist and support the cause! Or, y’know, just donate if
you already own a copy. ♥

Now, onto bizniz. BOOK OF HOURS? Remember that? Alexis has been getting into some core design work this sprint, and has produced the single most juicy design doc I’ve ever seen him make. I’ll let him talk it through…

Here’s a very early, long-superseded draft of the skills system in BOOK OF HOURS:

(1) my games generally outgrow early design documents and the early docs get cast off chrysalis-wise, but I’ve learnt that it’s useful to hang on to the discarded husks. The design process is often like roaming a semi-wilderness, and you’ll never have a definite map, just a series of explorer’s diaries. Earlier diary entries may describe places you’d thought were unhelpful, but you later want to return to. Pixar used the phrase ‘exploring the neighbourhood’ to describe this incremental quality.

The arrows tend to go one way, but later steps inform previous steps. I might start with something like this:

but a lot of those numbers are obviously just easy multiples of 5 or 10. Most of the time you may as well stick with the easy multiples, because it makes everything more intuitive and you can tweak elsewhere, but often you’ll want to go back and change it. Or as the lore develops, you’ll think, crikey, Winter stuff should work differently, and you’ll go back into the mechanical design to change it.

Back to the skill design.

(3) Some of those skills are very flavourful, some less so. Nyctodromy is an invented word (thanks Matt for Greek etymology help!) which plugs back into the lore of the game. But ‘Horticulture’ is a more traditional top-down way to try to characterise skills – the kind of thing it’s useful in the real world to decide to read a book about, or score an interview candidate on, but not necessarily the kind of thing you’d use to distinguish one interesting character from another in a game. You get a lot of this sort of thing in skill systems (and I know, cos I’ve written a lot of them and done a lot of this sort of thing). It’s not always what you want. Let me move to a concrete example.

All the green-highlighted items are things that would conceivably fit under ‘Horticulture’. But isn’t this more fun? The system goal is to let people learn the world and define their characters (both as librarian and as library), not for us to assess the character’s career suitability as a guardian.

Of course, there’s a fierce complexity cap here. One of the problems with all my games, from Fallen London onwards, has been what you’d expect from an ADHD designer working in an ADHD framework: everything can connect to everything, and that’s sometimes exciting and sometimes a problem. It don’t fit easy in a spreadsheet and it don’t sit easy in a player’s mental model.

As has now passed into Weather Factory legend, Lottie got talking to a man on a train and the man turned out to be Ian Livingstone and Ian, when he saw the Cultist prototype, advised us to put a map in it to show people where to go and so almost at the last minute, we added the Mansus:

and for Exile, we made sure to add this:

and the equivalent for BOOK OF HOURS started as this:

and now Lottie’s turned it into something more coherent and attractive, though still extremely draft, which is this: 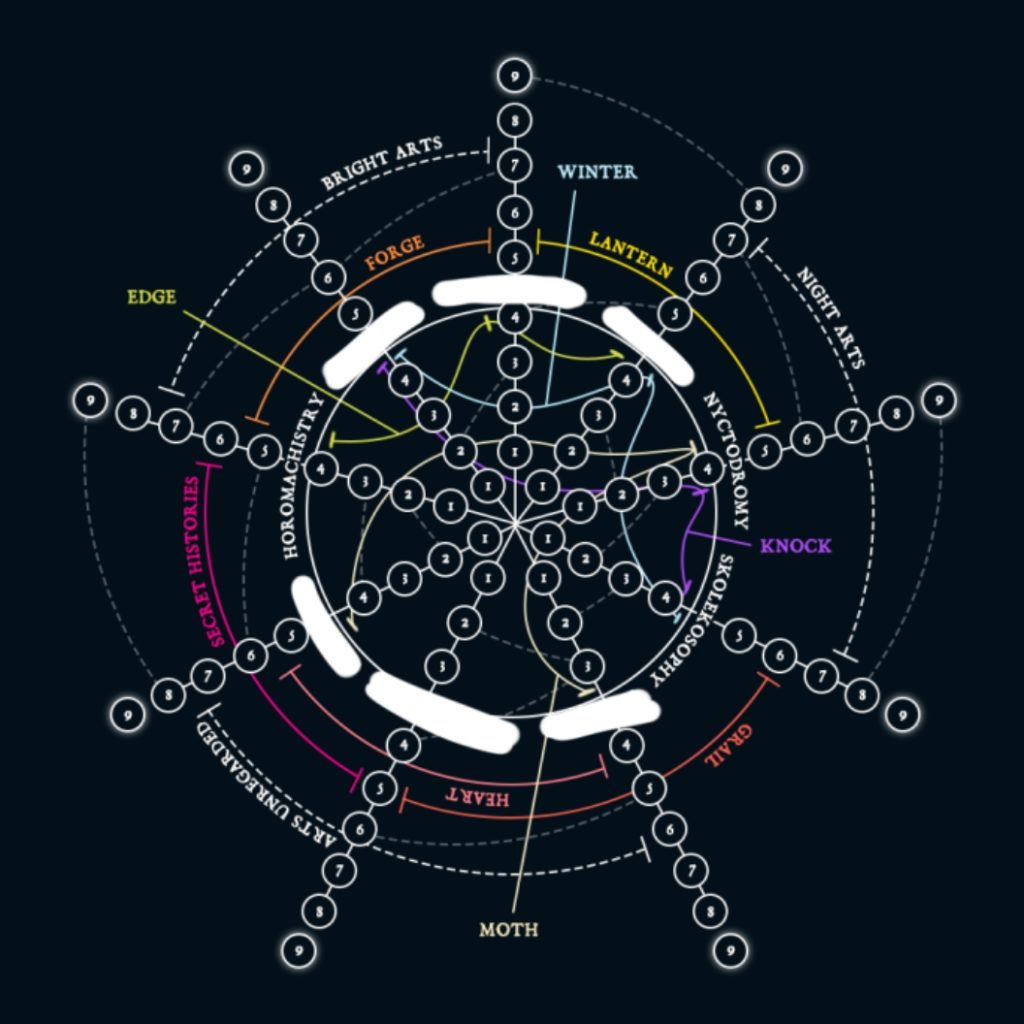 If you spotted any resemblances between that and our BOOK OF HOURS road map, you’re paying attention, award yourself a nine-pointed gold star.

See you next time.

Meanwhile, I’ve been hard at work on The Lady Afterwards, which I was delighted to see get a really positive reception! To answer two common questions I’ve seen floating around:

“Will there be a digital edition, too?“

Yes, we fully intend to release the limited edition boxed version along side a cheaper digital download. We just haven’t confirmed how that will work yet, so don’t want to promise it and then have to renege. You won’t get the full experience (e.g. we can’t send you candles in PDF form), but you’ll be able to play TLA whatever your budget.

“I want a boxed edition! But the 100 boxes of the limited edition will sell out really quickly…“

We hope they do! Based on the response so far, we’ll probably produce more copies after the 100 limited edition boxes are sold. They might look slightly different, but they’ll still have everything you need in ’em – just like our follow-up run of the Tarot of the Hours after their limited edition sold out.

Now, some actual updates on the game. 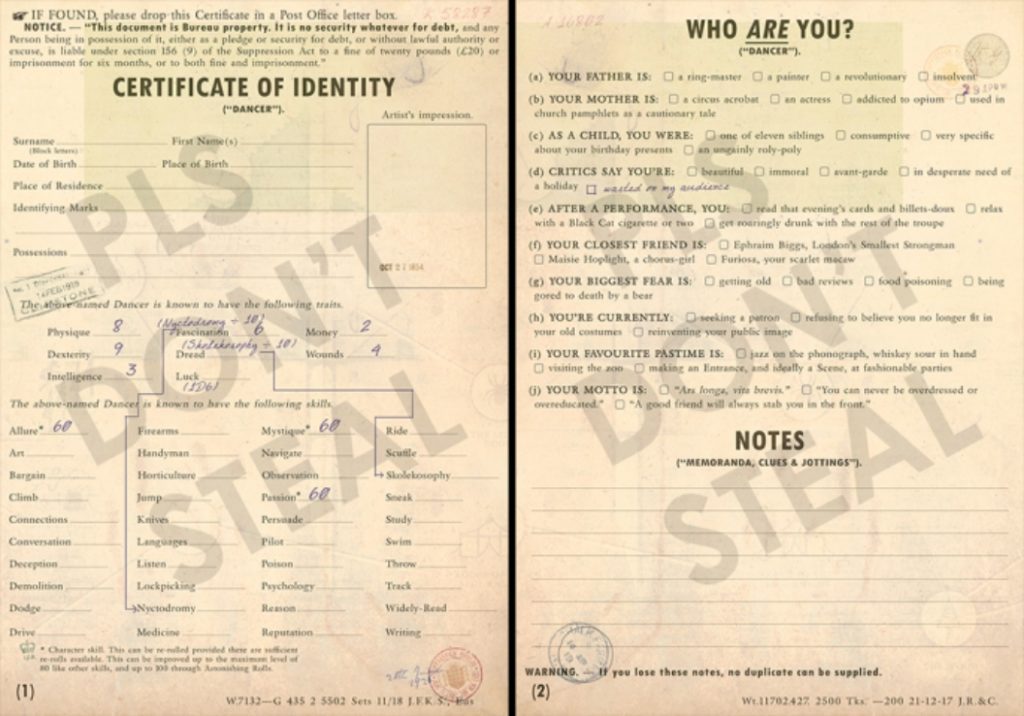 I’ve been working on the all-important character sheets, trying to create something that feels TRPG-ish, doesn’t require anyone to have any experience in TRPGs in the first place, and feels true to Cultist Sim. The above is the character sheet for the Dancer, for instance: double-sided, with personal details and skills on the front, and character details and notes on the back.

Here’s the questionnaire in more detail, for anyone who’d like to create their Dancer character now. 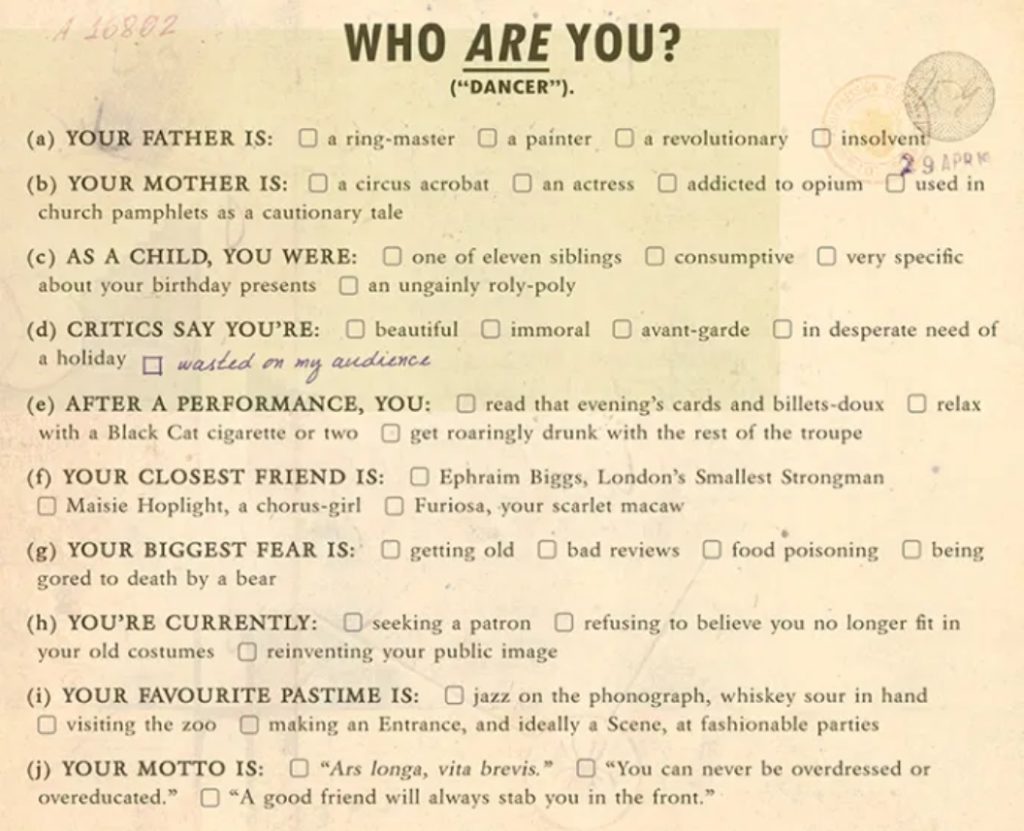 I’ve also been working on the soundtrack for the game, which will be a QR-code-unlocked Spotify playlist (hence the need to pixellate). I’m a massive early jazz / easy listening fan, so this is my opportunity to get some 20s vibes up in everyone’s grills.

I also finished the map of Alexandria, which players will explore in their efforts to hunt down Audrey Leigh Howard. There’ll be a lot of lore here, but the first thing you’ll probably notice is a tentative search area for the elusive Serapeum…

Finally, for Fascination points, I leave you with this trenchant quote from the back of the box. Make of it what you will.

Oh, and a long-awaited revamp of the merch corner happened this sprint! So I’ve finally managed to get rid of all the cardboard boxes scudding around our eyrie and have everything neatly aligned on copper shelves. This is where all orders come from if you buy anything on the Etsy shop. Hush House vibes, eh?

We’re going on holiday in a week’s time, so there’ll likely be another pause in updates while we’re away. But more on BoH, The Lady Afterwards and the tarot soon. 🕯