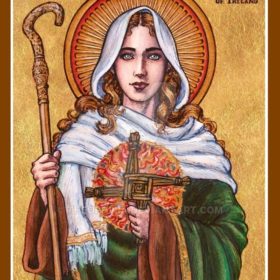 Oh hi there folks, I’m interrupting your usual blog broadcast from Lottie and Alexis to introduce myself. I’m Claire and I support the Marketing and PR for Weather Factory and have been slowly using techniques I learned off the telly, to convince Sulo and Chi to run away with me.

So I thought I might kick off with giving some juicy insights to the world of marketing and PR for game studios, but given that the fans of Cultist Simulator have a penchant for lore, mythology, religious text and just interesting stories as a whole, I thought I’d break the ice with the Story of Naomh Bríd or Saint Brigid if you don’t speak Irish.

Now I happen to be Catholic and a lover of bread. The latter isn’t relevant at all, I just really like bread. Despite the themes of CS and a fair amount of the community being probably not Catholic, I’m mentioning this because I think it’s cool that everything about what Lottie and Alexis have founded and the human beans that enjoy their games, is not at all ostracising (despite people crying because CS has ground them emotional to a pulp) and we all have a shared love of great writing and stories, regardless of whether people believe them to be real or purely set in fantasy.

This brings us to Bríd, who fyi is not the pagan Goddess Bridget, (there are more than one person with that name) but rather a badass Irish nun, who was canonised after a life of being a badass.

Bríd, or in Old Irish Brigit, is one of the patron saints of Ireland, alongside the likes of St. Patrick (you may have heard of him) and St. Columba. Every February 1st, Irish people,usually the small children folk, go and collect rushes and make Bridget crosses.

Now Patrick is infamous for telling all snakes to feck off out of Ireland and for other miracles, but Bríd has always resonated with me, because some of her acts were rife with sassiness. I won’t go through all the tales here, but my favourite story is how she acquired land in order to build a monastery and it’s usually referred to as The Legend of St. Brigid’s Cloak.

In Harry Potter you can use a cloak to turn invisible and that’s great and all but unless you’re using the cloak to overtake queues at gaming conventions, what’s the point? Brigid’s Cloak skills were far more impressive. She requested a plot of land from the King of Leinster in a serene part of Kildare, which had a lake surrounded by forest and on fertile plain on which to grow crops. The King refused her request, boo!

But Brigid was like “hmm ok cool cool, let me ponder on this”. She prayed that the King’s heart would soften and came back to him and offered a deal. “Give me as much land as my cloak will cover.”

The King rolf’d royally and said “sure you can have as much land as that cloak covers”. So Brigid removed her cloak and draped it fabulously across the land. The cloak begun to expand and expand, as did the Kings shocked face no doubt. After a moment the cloak had covered the entire plot of land Brigid had desired.

She won her land and the King had won a bag of humbleness, becoming a patron of Brigid’s monastery, assisting her with money, food and gifts that she dispersed amongst the people. I like to think that if sunglasses had of existed back then, she would have been the first “deal with it” meme or something akin to

I think Bríd and her shawl of sass could fit in well within the Mansus. Next time I’ll give some Marketing do’s and don’ts and maybe talk about some bread I like!

on Irish Introductions: The Sassy Legend of St. Brigid’s Cloak