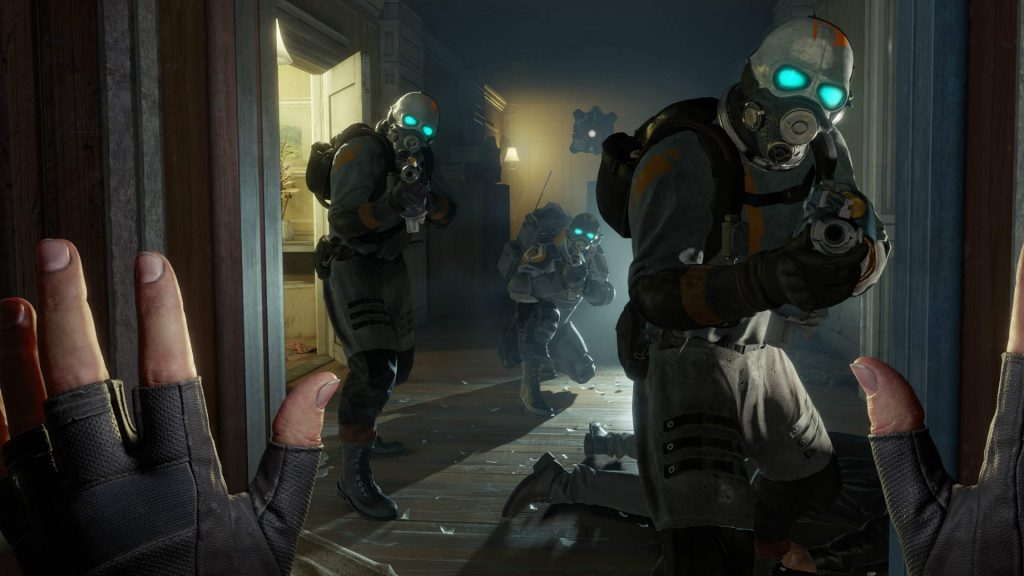 16.01.16
The ‘unusual uncle’ I mention below was David Insall, a fascinating man who at different times had been a sheep farmer, an environmentalist, and a contract officer in Oman. My mother assures me he once brought a wolf pup to her dinner party.

What’s a popular verb in games? I’m guessing a lot of you thought ‘shooting’, even though it’s not that common, in the same way that if I asked you to name an animal, a lot of people would say ‘a lion’. Shooting’s not universal, but it is endemic. It’s what non-gamers think games are about. It’s what news outlets use to illustrate headlines about how the games industry is making more than Hollywood, again. It’s the mechanic at the heart of Bioshock, Half-Life, Call of Duty.

It’s not much like actual shooting. Have you noticed that? My experience of shooting is very limited, but I know that much. An unusual uncle of mine tried to teach me to shoot in a field in Wales. I grappled a bulky, alarming object with both arms. I tried to listen to all the general instructions, I aimed at a piece of corrugated iron on the other side of the field. I pulled the trigger; there was a horrible noise in my ear and the alarming object leapt like a cow tossing its head, and the uncle told me I’d missed. Then I did it again, until we got bored, which didn’t take long.

There was no cross-hair. There was no cross-hair. I know how shooting works in games. You minutely twitch the muscles in your wrist; the cross-hair drifts until it coincides with a Nazi’s head; there’s a satisfying sound and a puff of blood and the Nazi goes down in a tangle. It’s a perfect little loop. Make a decision, wrangle feedback across seconds, interact, experience your reward. Reload, and on you go. How many Nazis and other disposables have you killed like that? I did a back of-envelope calculation, and as a middle-aged moderate-intake consumer of manshooters, it’s about twenty thousand. Don’t worry, this isn’t one of those editorials about how shooting is wrong, although I may yet do that. I thoroughly enjoy shooting, for instance, Combine soldiers. The headshot; the death static; the immediate reduction in the number of pulse rounds in the air. It’s very satisfying. It’s nothing like that field in Wales.

Healing; healing in games is the opposite of how healing actually feels. Healing is a calendar activity. It’s the careful curling of skin around wounds; it’s the uncertainty of whether muscles will ever align, whether you’ll be able to stand unaided again, whether the pain will stop and when, of sunlight and boredom and hospital ceilings. Healing in games is, by and large, less troublesome than adding funds to an Oyster card. Once you notice the differences, you can’t stop.

Have you done much jumping in real life? The whole point of jumping is gravity. Gravity is a harsh, not to mention an ankle-shattering, mistress. Jumping requires a run-up, a landing, careful consideration. You can’t jump without being immediately reminded that your consciousness is tethered to a big cluster of bones slathered in heavy flesh. Ow! Right? But look at Mario, look at Lara, look at anyone jumping over lava. Gravity is to that kind of jump what white space is to the end of this paragraph. It’s just something that comes next. We’ll continue on the other side without breaking stride.

I’m playing Bloodborne at the moment. Bloodborne has a reputation as a meaty, physical, bone-breaker, as merciless and arbitrary as an assassin’s Swiss watch: an artefact which doesn’t make compromises. But of course, it’s still a game! Every time I flick my Threaded Cane at an enemy, the whip coils in exactly the same pattern. Every time I strike enemies, it passes through (with a visceral, satisfying squelch, natch). It never misbehaves. It never tangles in a stray limb. I never slip on cobbles, my arms never get tired, my wounds don’t hurt. Bloodborne is about as realistic as chess.

Chess! It’s the comparison we all understand. It’s a battlefield, without a battle or a field, or death or soldiers or mud or uncertainty. It’s a battlefield where the sides take turns. Can you imagine the French and English at Agincourt taking turns? But it makes sense; it’s satisfying; players have enjoyed it for fifteen hundred years. Bishops don’t move diagonally, but with clerical law and privilege on their side, they could conduct refined strikes into unexpected quarters. Knights didn’t move in an L-shape, but they did obey a peculiar code that restricted their movements. Peasants didn’t become queens, but sometimes they’d raise a rebellion that threw the kingdom off its axis. Castles don’t travel, but they are blunt instruments of limited flexibility and tremendous power.

Chess makes sense because it doesn’t pretend to be a simulation. The similarities between games and reality are more striking because of their differences. We restrict the correspondences to the ones that interest us. Game design is poetry, and poetry doesn’t make daylight sense. “The world’s your oyster”? The world is nothing like an oyster, in every respect but one. If you think too hard about it, it falls apart. If you nod and move on, it works much better than a simulation. World, oyster, knife, pearl. Okay. It’s as sensible as using a mouse to place a crosshair on a Nazi’s undercut, which is to say, pretty sensible if what you want is to experience is the pleasure of decrementing the Nazi count, and not the complicated pleasures of wrangling a big hurty wooden thing.

Games are games. They’re carefully positioned port holes that we see part of the world through, and the part that we see is the part that the designer has laid out for us. They’re not simulations. Some of them pretend to be simulations, just for fun, but that’s just another designer experience. I just googled ‘simulator game’, and – okay, I got Goat Simulator: PAYDAY, which doesn’t really help my point and which frightens me a little. But my point is that no game is realistic, and that’s intentional. Realism in games – even once you get past the issues of crazy polygon counts and herniated CPUs – is as much of a fiction as jumping without fear of gravity, or taking turns at Agincourt. All these experiences are mediated, to show a particular part of the world from a particular angle. That, of course, is why we play them.