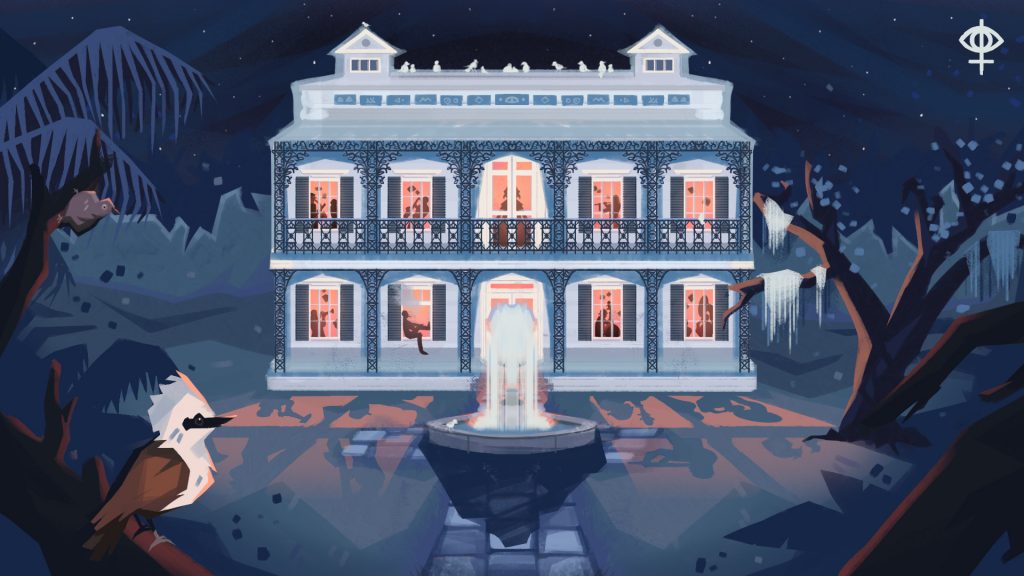 The House of Knowledge (or in romanised Arabic, ‘Dar Al-ilm’) was an Egyptian mega-library built in 1,004 AD. Its particular charm was that is was open to everyone – not just scholars or aristocrats – in the general spirit of ‘yay learning’. I imagine ‘everyone’ in 1,004 AD didn’t actually include women or slaves or whomsoever the head honcho was cross with that particular Friday morning, but hey! It was pretty revolutionary at the time…

This sprint Alexis has been finishing off final code foundations. It’s taken longer than expected, for tech as well as life reasons. But he should be able to move on to Hush House rooms and building mechanics next week. We’re also expecting some more music in the near future, so if it all goes to pot I can distract you with wistful Celtic melodies. Look over there! Harps!

We also made some significant design breakthroughs this sprint. I’m delighted to announce that BoH will have a skill tree – something we’re calling in-studio the ‘Mysteries Page’. Here’s a mechanical mock-up of the sort of thing we’re thinking, but please note: this is not how it will look in-game. We have a plan for that, but aren’t telling. >:)

The icons will be replaced by representative images showing the actual skills involved. You can expect the sort of things we teased waaaaay back in the day: remember this list?

I’m a pretty rabid RPG fan myself, so this gets me all hot under the collar. Many Cultist Simulator players lamented the lack of completionist features – things like a list of all books in the game, or a library of lore. Cultist Sim is all about feeling your way through a nebulous netherworld of uncertainty and dreams, so Alexis specifically chose to avoid definitive design like that. But guess what? BOOK OF HOURS is a game of peace, melancholy, satisfaction and curiosity, all of which fit rather nicely with completionist, controlled design. Om nom.

Speaking of skill trees, I’ve spent this sprint skilling up on art. I’m learning from the work we already have from the empress of colour and dreams, Catherine Unger. Here’s a direct comparison of our two Fuchsias – you can see the rules I’m taking from the original art and applying to a slightly different style.

With that in mind, here’s a second piece of concept art for those new libraries we mentioned last sprint. Introducing jolly Crossrow, crouched like a perfumed toad in the backwaters of New Orleans. Click for a larger version!

Crossrow lies in a garden city of the far West, an establishment of uncertain age. Unlike its sister libraries, it specialises in musical manuscripts and nyctodromy, merrily guarding its secrets in a gloriously decaying, surprisingly complex manor house.

There’s a lot in the concept art for lore-hounds, if you can find it. BUT I’M NOT GOING TO TELL YOU ANYTHING. Happy hunting! More concept art – and lore, and music, and design, and Skeleton Songs – soon. ♥

Leave a Reply to The Unrest Cure Cancel reply