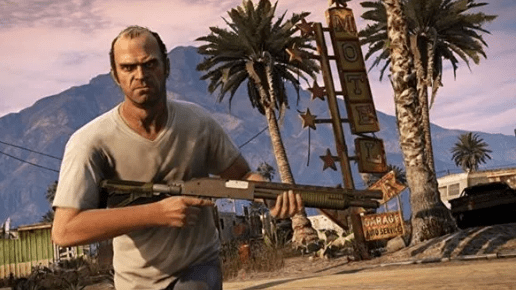 Three Reviews of Games from the Year 2035

BE IT KNOWN in honour of the most noble union of YVETTE GUILLEMOT, of Ubisoft, and DAMIEN HOUSER, of Rockstar, that the FRANCHISES ARE JOINED. The Franchise ASSASSIN’S CREED has begotten upon the Franchise GRAND THEFT AUTO the Game ASSASSIN’S CREED: VICE CITY. Play it, and give thanks.

I’m confident I speak for all patriots when I say how delighted I am that Mme Yvette and Mr Damien are finally to be wed. This game has been specially commissioned to celebrate their union, and is to be generously distributed free (even the DLC and Season Pass are offered at a subsidised price).

It is a symbol both of Yvette’s and Damien’s love, and almost as importantly, of the commercial alliance between the Spiral of Montreuil and the Star of New York. The Open World Wars have claimed too many innocent personae over the last five years. Peace between Ubisoft and Rockstar is long overdue.

The vintage setting of Vice City has been recreated in Ubi’s house engine with passion, fidelity and tact (all vital principles for a successful marriage!). I was a little surprised to find that all the faces of all the characters in the whole city are those of Yvette or Damien – which can make assassination missions tricky, and disturbing – but given how very beautiful both Yvette and Damien are, this is no great hardship.

This does include the dogs and the cats, who wear Damien’s and Yvette’s faces, respectively. I will confess to experiencing a nightmare about the cats. But it was quite a small nightmare, and Yvette does have a lovely face.

The missions are smooth, straightforward, diverting, although admittedly unusual. In an early tutorial, we chauffer Yvette through the streets as she stands in a car and waves regally. Cheering crowds, also composed of Yvette, toss cash and roses; it was an honour and a pleasure to drive carefully, minimising inconvenience to the ever-elegant Yvette, and remarkably satisfying to pick up the rose power-ups. In my personal favourite, we guide Damien to a laboratory in a research hospital (were you aware that in real life, Damien holds an honorary doctorate of medicine from several quite credible universities?). We then PRESS X TO CURE CANCER – the gameplay is limited, but it is such a satisfying button-press. Of course, in a very real sense, Rockstar Games has cured cancer; by real I mean metaphorical, and by cancer I mean sub-par graphics, but I’m sure we can agree on the general direction of the sentiment.

It has been suggested by certain cynics that this game is sycophantic. I am a little embarrassed to share the honourable profession of ‘game critic’ with colleagues so eager to take such a cheap and heartless shot. Yvette’s and Damien’s Christmas wedding is an event of pageantry and honour, in the grand tradition of studio weddings. It will bring joy to billions of people around the globe, and generate trillions of dollars in revenue. And that is, after all, the spirit of Christmas.

To break down the nomenclature: you’ve probably played Starcraft 3 Manager 2, or its predecessors. In case you’re one of the five per cent who’ve never touched this venerable genre, here’s how it works.

The Starcraft 3 Manager series allows you to direct the fortunes of a team of pro SC3 players – recruiting players from the streets, adding smart supplements to the team’s diet, negotiating with organised crime. Of course, SC3 has always been the pro wrestling of eSports, famous less for the intensity of its play than for its feuds, its choreography, its body-alteration-gimmick-peripherals, its staged mid-match hacks. Consequently, it’s a great story-generator for a simulation game.

Starcraft 3 Manager 3 could hardly be more different from SC3 itself. It has headline-grabbing entertainment elements – it was the first to include paparazzi, drug-related murders and true love – but it’s also carefully balanced and beautifully engineered, cut-throat as a yakuza razor, tight and intricate as a spandex clock. As a competitive eSport, it’s long since eclipsed SC3 itself. SC3M3 players are the kings and queens of their kind – and now that they’ve started marrying into the game dev dynasties, they’re one step short of becoming literal kings and queens. I would not mess with an SC3M3 player. I would not mess with her in the rain; I would not mess with her on a train.

So – stay with me here – Starcraft 3 Manager 3 League Master 3 allows you to direct the fortunes of a team of pro SC3M3 players. League Master is the troubled stepchild, or possibly the prodigal black sheep, of the family. League Master is a digital CCG with unusually arcane rules. It’s costly, buggy, beautiful, sluggish, and addictive as hell. The intricacies of SC3M3 are lost in the weird mechanics for Blackmail Showdowns. The SC3 in-jokes in the card blurb are only really comprehensible if you’ve been following the SC3 stories since the beginning. But it’s fun as all hell, and you might just like playing three games at the same time.

Should you buy and play SC3M3LM3? Yes, if you like any of the following: Zerg, CCGs, sex scandals, regression, the myriad facets of human experience, turducken.

There’s always more content in Quest Quest. There’s more content than you could ever consume. This is because Quest Quest is a delightful, delirious, monstrous pyramid scheme. You play for free, forever, but from the moment you create your character, a timer begins to tick down. You have one month to play – enough time to get comfortably into the mid-levels – before your account is deleted forever. Unless you create content, of course. Every content chunk you add to the game increases your play time. Every upvote on your content incrementally increases the play time further. You could just walk away at any time and let your character die. You could. But you’d lose all that progress.

If you’re having a hard time keeping up, you can switch to Gold Membership. Gold Membership means your play time will be consumed at half the normal speed. But if your timer hits zero, you start incurring fees, until you get back on top of your content quota. Or unless you delete your account. And you could! At any time you could! But you’ve come so far!

Platinum Membership ensures that your play time will be consumed at one-tenth the normal speed. However, for each full 24 hours you spend with zero play time remaining, you forfeit one major organ. You can live a reasonably long and productive life with no spleen, no gallbladder, no reproductive organs, one kidney, one lung, and only a left eye and ear. I have first-hand experience of this.

I wouldn’t ask this lightly. Quest Quest is a deep and slippery pit. But I would be very, very grateful if you could sign up, try out my Home of the Rainbow Seductress content, and upvote it. Every upvote counts. Please, have a heart, or I won’t.

1 comment on Three Reviews of Games from the Year 2035

on Three Reviews of Games from the Year 2035