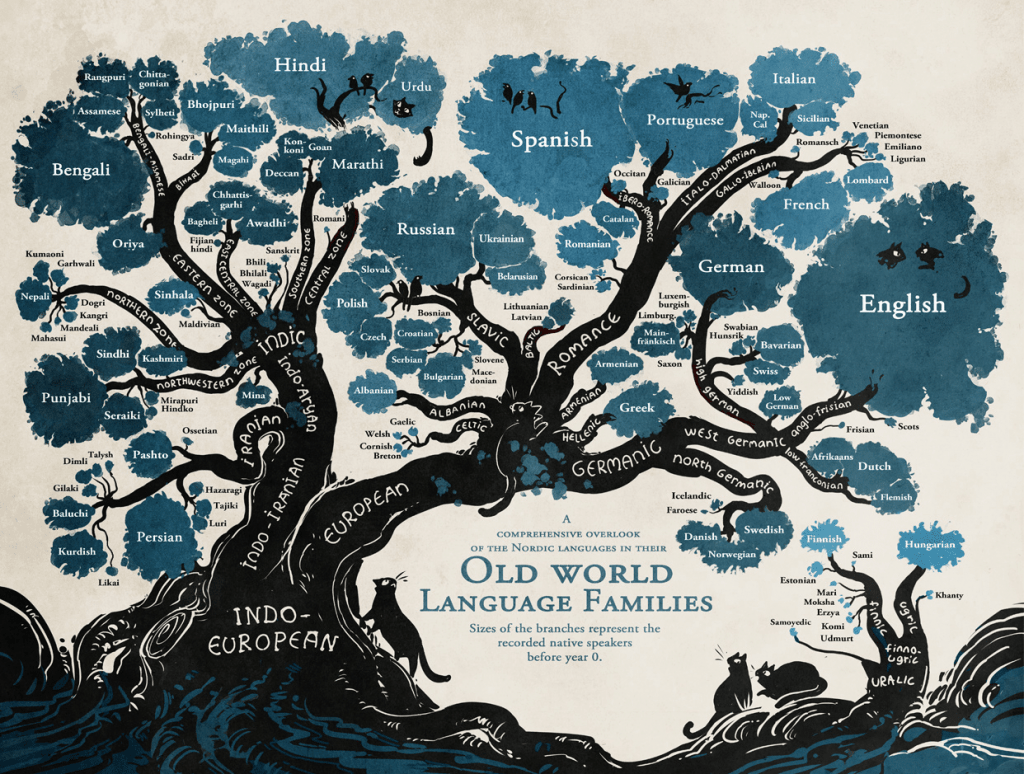 ‘A language is a dialect with an army and a navy.’

If you got as far as (4), feel good. I only got to (6), and I have a linguistics degree, though not a very good or recent one. Likely wrong answers include Yiddish (it’s written in Hebrew but it’s mostly Germanic), Farsi/Persian, Turkish. If you said ‘Egyptian’, I vaguely think that’s wrong, I think it’s more about areal influence, but I’m not enough of a linguist to argue the case either way.

A fair few people are surprised to learn that Arabic’s a Semitic language, because ‘Semitic’ and ‘Jewish’ sound associated to most English speakers, while ‘Jewish’ and ‘Arab’ sound very distinct. So, about that:

I would have gone with (3) until I looked into it. I had no idea about the etymology.

So to be clear, ‘Semitic’ is simultaneously

(a) a commonly used and widely accepted term for a major branch of the Afro-Asiatic language family which serves as a meaningful basis for investigation into the quasi-phylogenetic taxonomies of diachronic linguistics;

(b) a comically inaccurate relic of eighteenth-century scientific racism, itself based on mediaeval folklore about the origin of nations

And this is a good thumbnail for some of the problems of using material from historical linguistics in a game.

Let me give an example of that bonus point. If you’re not from south-east Europe, you may be hazy on the differences between the nations and the republics and the languages of the former state of Yugoslavia.

3. What are the official languages of the successor states of Yugoslavia?

My guess was 6, and I was confident I was right, and I wasn’t! I left out Montenegrin, because I just thought they spoke Serbian in Montenegro, but Montenegrin is a recognised language, not just a Serbian dialect, I learn. While (Eastern) Herzegovinian is classified, at least in what I’m reading, as a dialect not a language. And the Republic of Macedonia became the Republic of North Macedonia in 2019 to settle a naming dispute with Greece, which has its own region of Macedonia, but the language (which is very similar to Bulgarian and almost nothing like Greek) is still called Macedonian not North Macedonian

The funny thing is, if you picked 5, you would be arguably nearly right, except you’d have left out Macedonian and you’d have pissed off a lot of people who find the term ‘Serbo-Croat’ offensive and inaccurate. My Croatian friend Ivan is one of them: he points out that Serbian and Croatian don’t even share an alphabet. My Croatian ex-wife Ana is not one of them: she reckons there’s more difference in the spoken varieties between US and UK English. Wikipedia describes Serbo-Croatian as ‘a pluricentric language with four mutually intelligible standard varieties’, but the talk page is what you might call lively.

The name Serbo-Croatian was coined in 1824, by Jacob Grimm (yup, that Grimm). But in the 1930s when BOOK OF HOURS is set, the constitution of Kingdom of Yugoslavia declared that its official language was ‘Serbo-Croato-Slovene‘ (and Slovenian is actually a fair way from Bosnian/Croatian/Serbian). So if I put a contemporary book of Yugoslavian folktales in the Hush House library, what should I call the language it’s written in?

The former Yugoslavia is a more complicated bit of the world than some, but not uniquely so. It’s approximately the same size, with approximately the same population, as the US state of Florida. It’s about half the size and population of the nation of France. So now multiply that issue a few dozen times, to cover the rest of Europe over the last hundred years (lotta borders changed in that time).

Now do India. Which has 22 constitutionally recognised languages and almost two thousand other languages, many of them (e.g. Tamil) the focus of furious and contemporary ethnonationalist disputes. Where a language like Nihali is, depending on who you talk to, a fascinating language isolate used by a threatened minority, a dialect, or even just a thieves’ cant.

“An entire mythology is stored within our language”

So why am I diving into this alarming ocean? Cultist Simulator had a really simple model of four real languages for texts – Latin, Greek, Aramaic, Sanskrit – and four fictional languages, or fictionalised versions of real languages – Fucine, Phrygian, Deep Mandaic, and Vak. I can’t think of another game which has spent even this much effort on simulating languages and study. I could just stop there. I would get some niggles from people telling me that book x should really be in Hebrew not Greek, or that you can’t learn Koiné Greek and then just start reading Herodotus in Ionic Greek, but it’s just a game, after all.

But, and let me put this in the all caps it deserves, ALL THIS STUFF IS GLORIOUS AND AMAZING AND IMPORTANT AND FASCINATING AND ALMOST COMPLETELY UNTOUCHED IN GAMES. If you strongly disagree, I doubt you made it past all the business about Macedonian vs Bulgarian. If you slightly disagree, I invite you to look at this gorgeous item by Minna Sundberg:

Don’t tell me you don’t feel something when you look at this, cos I won’t believe you.

Or how about this: earlier I mentioned an Indian language isolate called Nihali. An isolate is a language with no identifiable relatives (like, famously, Basque/Euskera). It can be hard to determine whether something is really an isolate, because it’ll often absorb words and features from other languages in the region, but the words for, e.g., egg and blood in Nihali can’t be linked to any vocabulary in other languages. When you’re writing a game about cults and libraries and esoterica, that’s the kind of fact you want.

Or how about this: there’s an obscure Andean language called Kallawaya, used exclusively by a wandering group of Peruvian healers, who can be plausibly claimed to pre-date the Incas. Kallawaya has features in common with Quechua, the indigenous Peruvian language(s) used by the Incas, but also with Pukina, an enigmatic and extinct language that might have been connected with Capac Simi, the secret language of the Inca royalty. None of Kallawaya or Quechua or Pukina have a known script of their own – Quechua uses Latin script, and the Incas may or may not have used knots to record their language.

Or how about this, since we mentioned Basque: Basque is old, really old. It’s probably the only pre-Indo-European language left in Europe. So there are excitable theories that it’s a Neolithic or even a Neanderthal relic; there’s a hypothesis that the similarities between haitz, stone, aizto, knife, and aizkora, axe, suggest that it dates back to when tools were made of stone. This is probably not true, but crikey wouldn’t it be fun if it were.

So it’s an absolute mithril-vein of ideas which feel powerfully relevant to the subject matter. When I invent languages, like the ones above, I can plunder real history and linguistics. And even when I stick to the facts, then I can tell a player through the system ‘your character knows Old Saxon, which will give you a leg up with learning Yiddish’ and, again, there’s depth which is hard to fake.

‘Serious affairs and history… are carefully laid snares for the uninformed.’

There are a lot of languages in the world. Call it 7000+, but it depends on definitions. There are an awful lot more classical or dead languages. I can’t put them all in the game, especially because I’m happily inventing more fictional languages to go along with the real ones. So how am I choosing?

(1) Cultist Simulator and BOOK OF HOURS are both Eurocentric games. That’s just how it is, and how it’s going to be. The early inspirations of CS are European mythology and occultism; that’s what I know most about; and I could spend the rest of my life drawing from that well without it ever running dry. So there will be more Latin books than Chinese books in Hush House. This also nicely side-steps a current culture-war trap.

(2) On the other hand, I’m not going to ignore the rest of the world, are you kidding me, two out of three of the fun ideas above are non-European. And it’s not like there are tidy boundaries between cultures anyway. Is Mithraism an Asian phenomenon? A European one? The only sensible answer is ‘yes’.

(3) Equally, I’m going to trim the hell out of European linguistics anyway, and cheerfully simplify when it’s convenient. This brings us back to the former Yugoslavia (and Wales, and Catalonia, and Moldova, and everywhere else that language is a live political issue). How am I going to deal with it? Tact helps; research helps; but honestly, I’m going to steer clear of anything too difficult. I have to strip out at least 80% of the European languages I might want to use. Minority languages with difficult political contexts are less likely to make the cut anyway, because there probably isn’t a lot of literature written in that language. Unless there’s something unexpectedly fascinating about them, in which case hell yes they’ll make the cut.

History vs game design is a false dichotomy, just as is politics vs game design. You never choose one over the other, at least not if you’ve read more than one book. Creative work is synthesis and arbitrary choice. Which is another way of saying I’m going to put the languages in that sound the coolest.

9 comments on The Confusion of Tongues

on The Confusion of Tongues