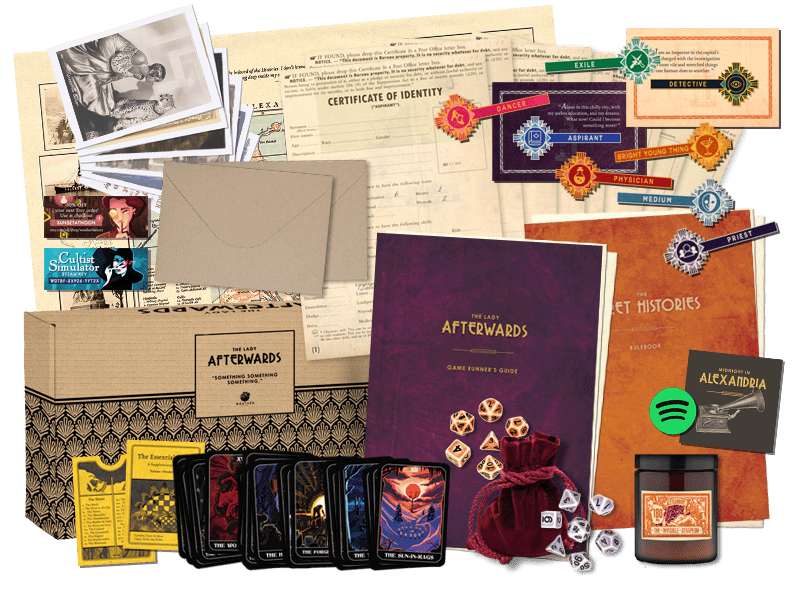 Lots of announcements this sprint, everyone! Which is good, ’cause I just finished We by Yevgeny Zamyatin and it turns out dystopian Russian novels are very depressing.

You can get your hands on The Lady Afterwards‘ limited edition physical box on Thursday 21st October 2021 and we’re releasing the digital PDF bundle a few weeks later on Thursday 18th November 2021. Here’re the deets: 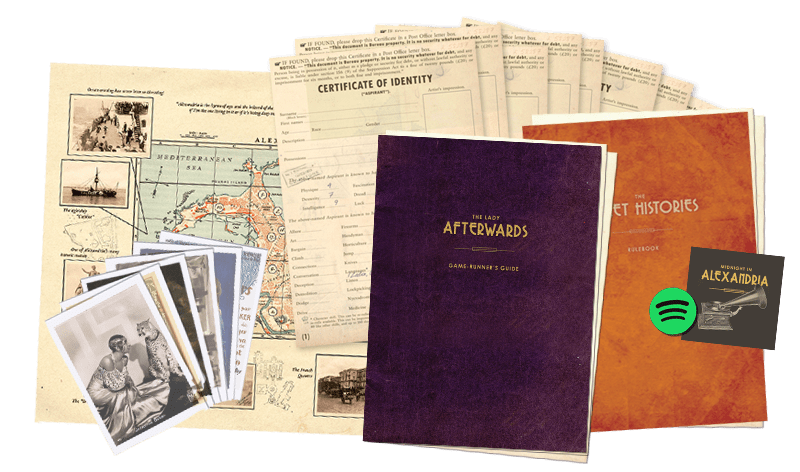 We have some contingency plans if the boxed edition sells out in five minutes, but I don’t want to count our chickens before they’re hatched. But whatever happens, we gotchu.

This sprint we ran another TLA playthrough with Alexis as Game Runner – he’s alarming good. As a result I’ve made another round of changes – splitting the original booklet up into a Lady Afterwards guide and a Secret Histories rule book, for example, and replacing Mansus candles with a second set of dice to better build the Regard of the Hours. I don’t think we’ve spoken about the Regard of the Hours yet, the dice-rolling mechanic reflecting the Hours’ personal interest in players’ goings on. So here’s how it works: 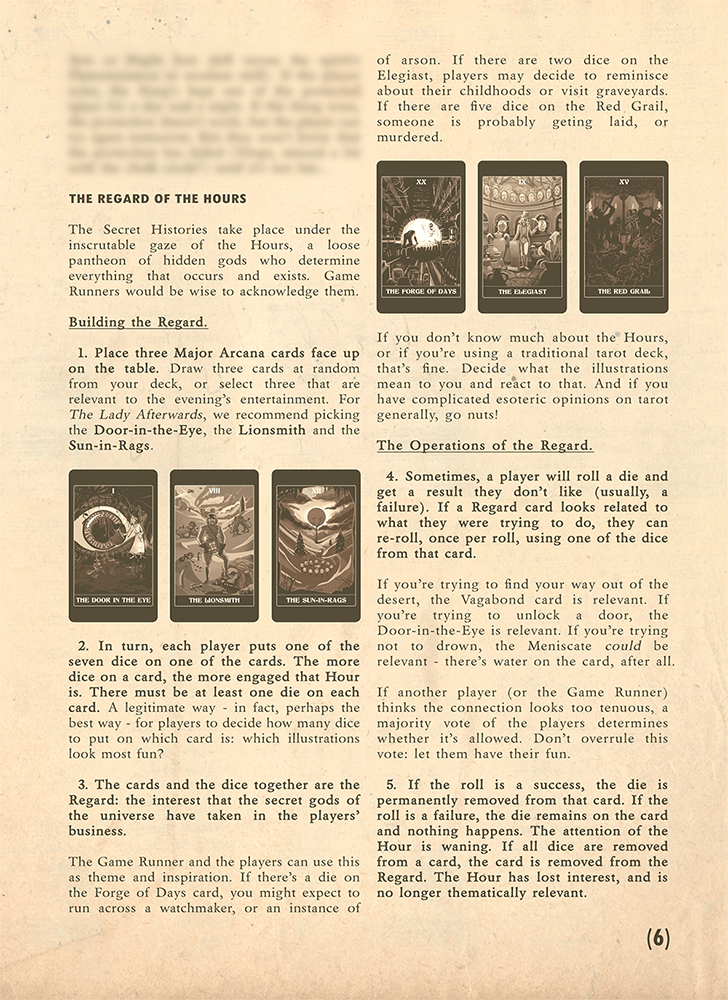 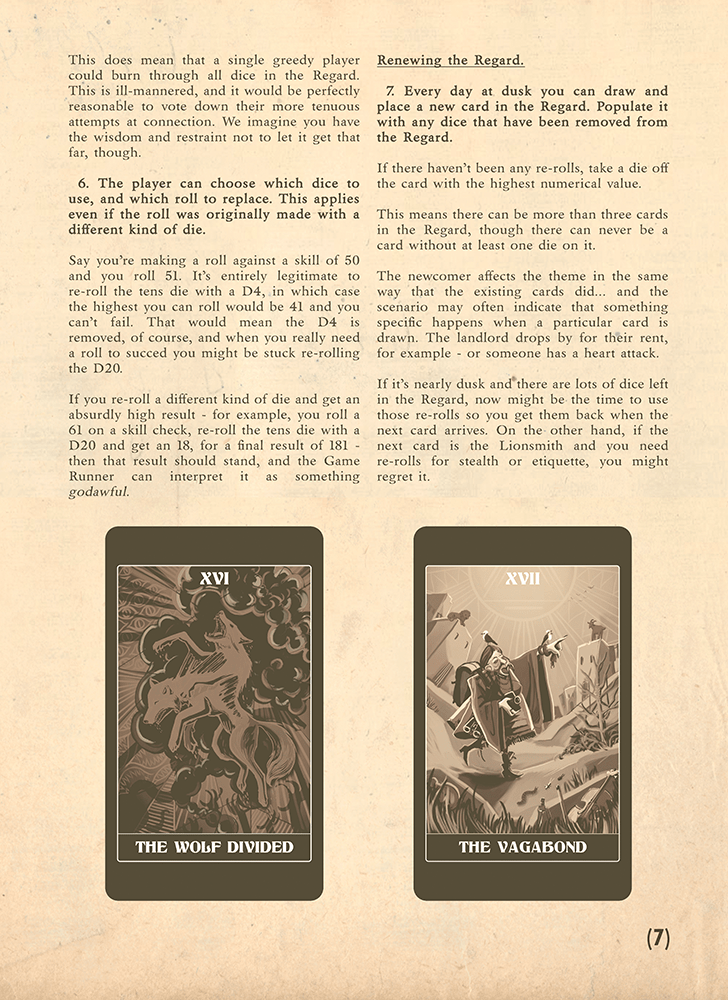 Wish I could share more mechanics with you, but I can’t without spoilering the plot or revealing too much of the Secret Histories rules! But I think Cultist fans will like it. 🙂

Finally – some of the more eagle-eyed in our audience have already noticed this, I believe – Alexis has relaunched the Enigma of Secret Histories project. He says:

Cultist Simulator, like Fallen London before it, had a complexus of Easter eggs and puzzles for highly engaged players to chase down. And just as with Fallen London, this complexus – ‘Enigma’ – got more elaborate and difficult over time, in a sort of arms race between me and the keenest players that left everyone else behind and took up way too much of my time.

So for attempt three, I’ve designed it as a more relaxed, more accessible, and longer beast. A sun-basking serpent, as it were, rather than a hummingbird; or a hedge maze rather than a carnival. I want people to be able to wander into the labyrinth on their own, or in pairs and threes, without needing help from or feeling that they’ve missed out on the fun.

There are marks of distinction to be gained from engagement. You may see them on other folks’ avatars or elsewhere. Go here to begin. 🌓

Still here? Let me talk about WFCAT. WFCAT, the Weather Factory Catalogue, is an illustrated accounting of all our works, distantly inspired by the Factory Records catalogue. It’s very much a work in progress, but it already includes prototypes, games, books, occult entities, material entities, artworks, merchandise and miscellanea. When we’ve done, it’ll be something you can browse on the new site – a formal garden to go alongside the hedge maze of Enigma, which will occasionally afford views and clues. We like the idea of putting out an illustrated book, too.

Our new website should go live next week, and we move into some snazzy new offices managed by – I kid you not – something just called ‘The Bureau’. Stay tuned for more BOOK OF HOURS, Lady Afterwards and photos of our cats having their birthday. Happy weekend for now!