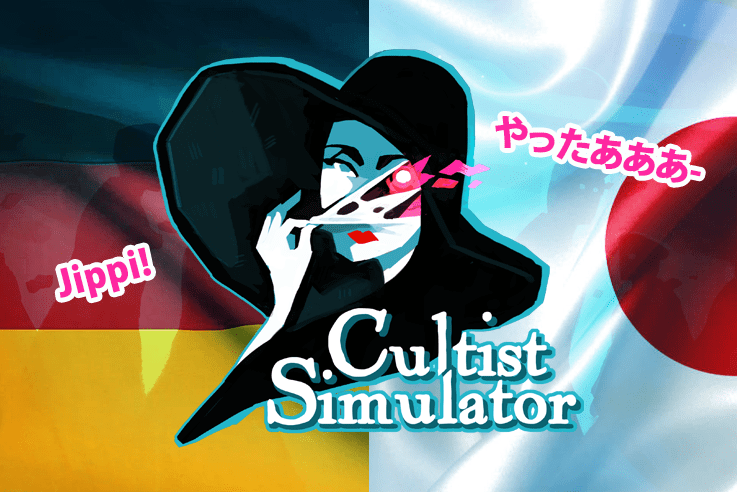 Orgoglio is Italian for ‘pride’ and used as straightforward allegory in The Faerie Queene. He’s a giant, introduced like a 16th-century video game: our noble HERO truffles up to the gate of a dark castle, met by the hideous GIANT and his evil WITCH FRIEND on a PURPLE MANY-HEADED BEAST BREATHING FIRE FROM BLOODY MOUTHS. Our hero literally casts a big ol’ buff on his sword and a spell to make his shield all shiny and 24 stanzas later we have a dissolving, bloody headless-and-legless corpse of a mini-boss.

Sadly, this has nothing to do with our last fortnight, which we have spent taking it easy and having lots of people round for dinner. But hey ho. I do have some Cultist updates for you, at least!

We’re working on two new full-game localisations: GERMAN and JAPANESE! Depending on how those do for us, we may consider adding more languages later down the line.

We’re still finishing Russian and simplified Chinese versions of the EXILE DLC, so I’ll confirm a release date for those ASAP. 🙂

Some of you may have heard about China’s difficult publishing requirements for foreign games, and how they’re tightening up current loopholes. Sadly, this means Cultist is being removed from the Chinese App Store at the end of this month. ☹☹☹

(One of the red lines for content is literally:

“Depicts religious activities or the supernatural, such as cults, fortune-telling, ghosts, zombies, vampires, etc., or using the banner of science to fabricate or reproduce the supernatural in real life.”

The uncertainty around the Chinese App Store is why we haven’t confirmed a release date for the EXILE DLC on mobile. But now we know where we stand, I’ll announce one soon!

In happier news, Cultist is now included in Google’s new Play Pass, which is their version of Apple Arcade. You pay a monthly subscription to get an army of usually premium games for free – now including everyone’s favourite Lovecraftian card sim. Woot!

Our long-awatied new pins are now live. You can nab your very own miniature Lunatic, Hint, Maid-in-the-Mirror or Marinette from the Church o’ Merch. We’ve also released a slightly modulated Beach-Crow’s Treasure bundle if you’d like to buy them all at a slight discount. If you’re the sort of person who likes wearing small, shiny nods to the invisible arts on your lapels, check ’em out.

I also have a release date for our Travelling at Night Kindle and eReader cases: next month, on Friday 21st August. I’m running a small batch of ’em to begin with, to test appetite and device demand – so get ’em before they’re gone!

I may be offering some of these cases before release, as part of our annual #Lovecraftday celebrations. Watch this space…

This was nice, and unexpected! Weather Factory won ‘Most Innovative Narrative PC Gaming Company’ in this year’s Technology Innovator Awards. I reckon Cultist *is* pretty innovative, and we have a lot of equally weird ideas for BOOK OF HOURS. So thank you very much, Corporate Visions, and hooray for the mighty flint chick. 🐤

That’s it from us, Believers. Keep safe, keep cool and keep culty. ♥