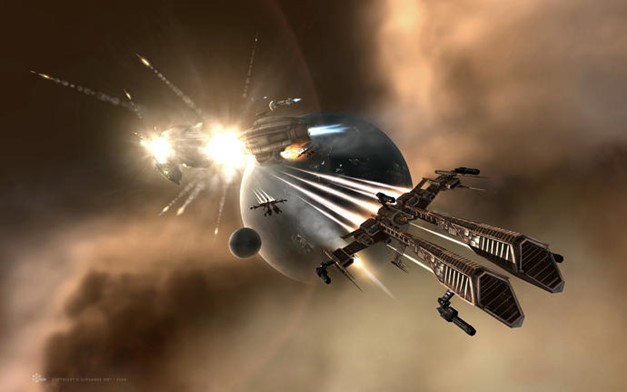 How It Happened To Happen

22.08.15
This was my first column for Eurogamer, so I made a point of talking about fish genitalia, mostly to see what got edited. Nothing did, so it ended up being a slightly more colourful first outing than I’d intended.

Jack Cohen is a reproductive biologist who gives talks on speculative xenobiology. I once heard him explain how we had happened to evolve from a species of fish that kept its reproductive organs next to the pipes it used to eliminate waste from its body. Here are the things, he suggested, that this gave the world: our whole attitude to sex; the sense that it was something filthy (pleasantly or unpleasantly); the design of toilets. We might have evolved into creatures with our genitals in our heads, which would make hats more complicated, toilets simpler and, more significantly, would have completely transformed our attitude to procreation. But it happened to happen the way it did.

In 1971, two guys in Wisconsin – indie developers, in today’s terms – released Chainmail, a ruleset for miniatures wargaming. It included rules for pitched battles, for jousting and for castle sieges. It did pretty well for what it was – it sold a thousand copies in its first year. One of those two guys happened to add a fourteen-page ‘Fantasy Supplement’ to the end of the book, with rules for wizards and dragons and whatnot.

If you’re a geek of a certain age, you’ve guessed this was Gary Gygax, and the Fantasy Supplement was what became Dungeons and Dragons. Here are some of the things that Dungeons and Dragons gave the world: classes, levels, experience points, stat scores at the top of a character sheet, health points topped up by potions or priestly healing spells, Tolkien-based ecologies, random loot drops, and the equipment upgrade treadmill that powers everything from Borderlands to FTL to Diablo.

Okay, but these are all pretty obvious ways for a system to evolve, right? Not particularly. You might have heard of Traveller. It’s a science-fiction pen-and-paper RPG that post-dated D&D by only three years – it was part-inspired by D&D, but it didn’t have classes or levels or experience points or a loot drop upgrade treadmill. Its influences were Asimov and Niven, not Tolkien and Vance.

In Traveller, you weren’t a group of adventurers who explored ruins. A Traveller party was a crew of ex-military types who travelled round the galaxy on their own starship, looking for odd jobs from patrons to pay the fuel and repair bills. That’s right: it had a supply and survival mechanism baked in, 40 years before the roguelike revolution, 40 years before FTL.

(Traveller did have stat scores (in the high single digits) at the top of a character sheet, but any combat damage came directly off those stats. If one stat dropped to zero you passed out, if three dropped to zero you’d die. It was an elegant system, but evolution, in its random, ham-fisted way, left it to die by the side of the road.)

It had some great ideas and some ordinary ideas, just like D&D. It did okay; it went through a number of reboots; and it’s now all but dead. It left traces, but it hasn’t had anything like the geological impact of D&D. Everyone knows what liches and drow are. Almost no-one remembers Traveller‘s k’kree and vargr. That’s evolution. Some species happen to be better adapted, and become part of the nature of things. Some end up as an odd pattern in a limestone stratum.

The first edition of the Advanced D&D Player’s Handbook talks about how you might think it’s confusing that characters, spells and dungeons all have levels – so a 12th-level character might cast a 3rd-level spell on the 5th level of a dungeon. Apparently the TSR guys considered making it rank for characters and power for spells, but it was too late to change. That’s the only reason, now, that we talk about ‘levelling up’ not ‘ranking up’. One game designer in an office in Wisconsin determined how a hundred million gamers would talk for the next 50 years, probably in the course of one meeting.

But I’m writing the rest of this column from a universe where Wisconsin was hit by a dinosaur in 1971, so D&D didn’t survive… and Traveller did. How do games look different?

The obvious: no Baldur’s Gate, no Planescape, no Elder Scrolls. No CRPGs in the traditional sense at all. Games are skill-based rather than power-based, with puzzles and action elements, and character life is cheap. We had our DOOM, we have a million skill-based ARPGs. Here on my alternate desk is a collector’s edition copy of the CD of the horror FPS System Shark, but I’ve never finished the electrocution jumping trap that SHODAN sets in the last act.

Stories are about tribes and crews and noble families, not individuals. Characters in story-driven games reproduce, age, and die in combat. The picture is big and the lifespans are short. Game writers are notoriously envious of genre franchises like Peter Jackson’s Dune, where you can keep the same protagonist all the way through and not have to write round their inevitable death.

With no grind, there’s no MMOs in the sense you know them. MMOs are half EVE, half Counterstrike, half MOBA. That’s too many halves for any one game, and in fact they’re sold as multiple games. Some players are always younger or better or more gifted with leisure time than others: so all online multiplayer games have a meta-tiering system, where the best players get to be generals or relic-bearers or champions who fight each other in single combat with an entirely different game client. You can’t grind your way to better skills and equipment – you can only prove yourself and seek election. The alt-universe politics of selecting higher-tier players are a heady mix of tournament and nepotism.

eSports hit ten years earlier (though there’s no Starcraft: no D&D means no Diablo, no Warcraft and so no Blizzard). Corruption in alternate-world MMOs is a big issue. That extra decade is enough time for the ecosystem to pick up big money, and the match-fixing and scandals that come with it.

One cluster of scandals had an odd outcome. It’s now legal to use bots for some of the roles in these complex multi-tier game. In fact some roles in some games, like logistics and support, can only be filled by AI players. These are totally custom software built and maintained by each esport team’s cadre of developers, with the kind of expense and effort and ingenuity that goes into racing cars. Inevitably, some leagues are AI-centric, with human players as more mascots than competitors. The USAF and the CIA Special Operations Division both sponsor leagues as training grounds for their autonomous UAV programme…

Back to our timeline! … where DOOM sparked the FPS. Dune sparked the RTS. MMOs were, approximately, invented in Essex in 1978. We might never have had any of these genres. Or we might have had them in a completely different form. Rush, tech, turtle – quick-time events – DPS/tank/healer – FedEx quests – right-click to move – none of this might ever have happened. Genres look as eternal and fundamental as gravity, but somewhere, right now, an indie developer is about to do something tiny and casual that will alter the whole of gaming for the next 50 years. Possibly it’s you.

on How It Happened To Happen