You’ve probably heard the phrase “art imitates life”, recognising when art reflects society’s real-world interests and views. Think Banksy, or The Mummy 3 being all about how much China scares the US. But you’ve also probably heard the phrase “life imitates art”, where reality copies what art presents. Think body dysmorphia from Instagram or people being kinder because they watched a Tom Hanks film. Games seem divided on which way round the equation should go. Broadly, players go one way and developers the other.

In October 2020, Larian Studios released Baldur’s Gate 3 to general acclaim. By the end of the year it had an 88% positive rating on Steam and 29,000 reviews. Boxleiter maths would conservatively estimate that to be 1.5 million sales, which means it grossed £72,000,000 already – and it’s still in Early Access. But less shiny was the mild industry buzz around a Steam update a week after launch. In the post, Larian gently ribbed its players for choosing, on average, a generically handsome white guy as their player character rather than the more exotic options offered by the character creation system. “We gave you demon eyes, horns, and even tails,” they wrote. “We are sorely disappointed.” 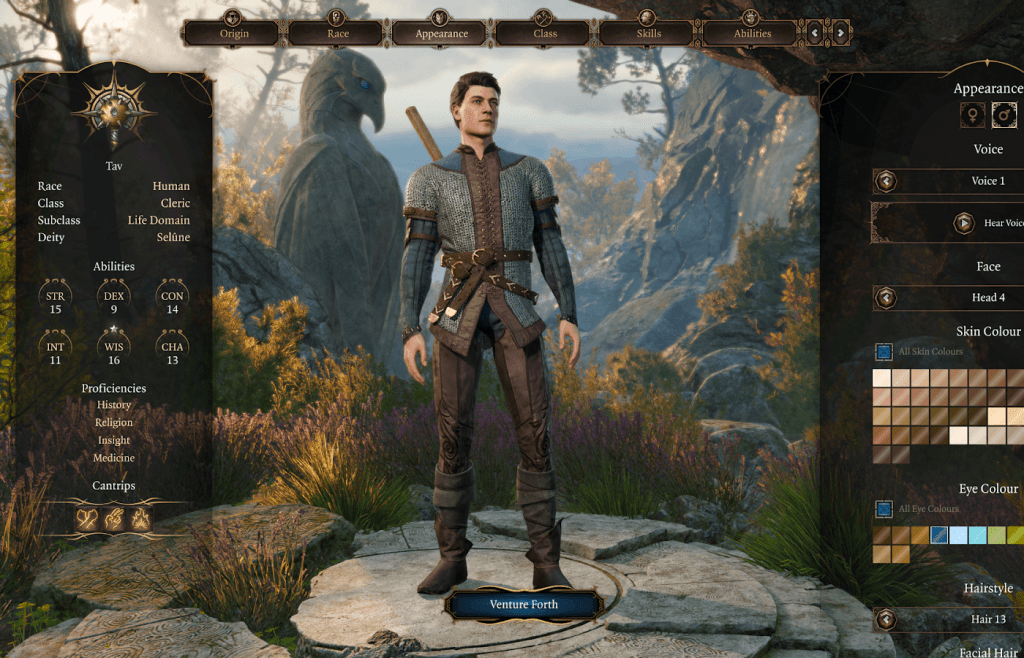 This was widely reported in industry press as a fittingly progressive dunk on white male gamers. A lot of those articles chose to run the story with a headline image of a generically sexy female character with heavy eye make-up, but that’s for another day. For now, it’s worth digging into why the most popular player character was, in Larian’s words, “the default Vault Dweller”.

From Larian’s point of view, it’s a shame that so many people weren’t interested in the creative range available to them. But the player character is just that: the player’s character. Given the option, most people like being a hotter version of themselves. This is why gyms, make-up brands and cosmetic surgery are multi-billion dollar industries. The majority of gamers are real white men, some of whom are probably not as beautiful as they’d like to be. So it’s unsurprising and benign that the most popular player character is a handsome, generic white guy.

Larian hoped players would follow the game’s lead and play a variety of diverse characters: they’d expected life to imitate art. Players hoped Larian would let them play the game in their image: they wanted art to imitate life. We laughed at those players, though it’s worth remembering that the reason we want diverse characters in the first place is so minorities can look in-game like they do in real life. It’s inconsistent to praise some people for wanting that and mock others for the same thing.

Reality, as ever, is complicated. Art doesn’t exist in a vacuum, nor does it sit in an isolated dialectic with life. It exists in a boiling chaotic mess of influences and experiences and context. It’s vital to treat the world as it is: when we don’t, we get conspiracy theories and Brexit. Games are still overwhelmingly played by white men, and that’s neither apocalypse nor Utopia. We can encourage increasing diversity from our existing audience, as Larian has done, by offering diverse options and encouraging players to step out of their comfort zone. But art isn’t enough. If we want player characters to be as diverse as Baldur’s Gate 3 wants them to be, we need to diversify the playerbase. And that’s a long-term unsexy series of school talks and outreach and socioeconomic change and non-game-making-things that many of us don’t have the time to pursue. But unless we do that, change will be slow. We’ll make art for the audience we wish we had and scorn the one we do.

2 comments on Gather Your Arty

on Gather Your Arty