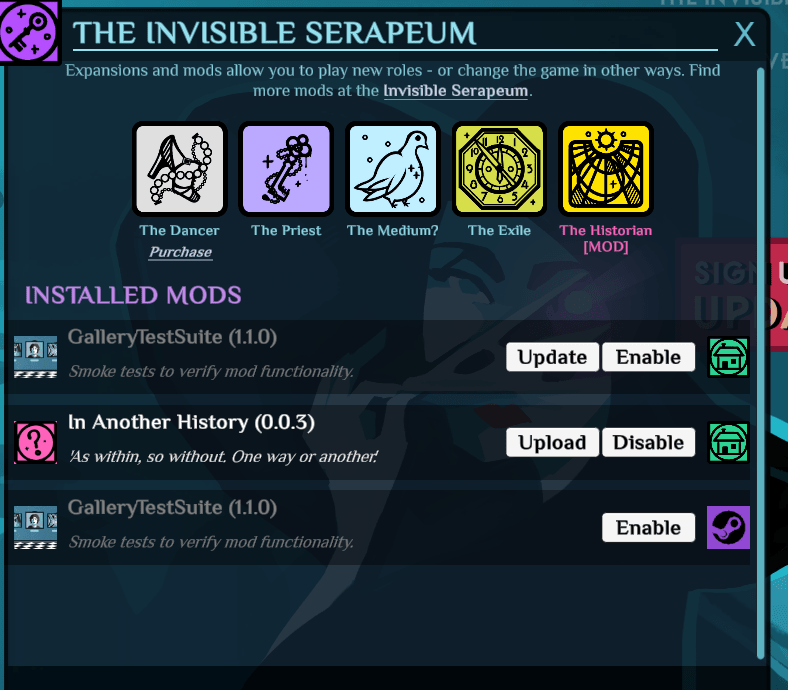 DAYBREAK IN THE INVISIBLE SERAPEUM

This is the season of the Forge of Days – the hottest August day in the UK for the last decade – so here’s something apposite for you.

I’ve been quiet recently, for two reasons. One is that last month, Lottie finally cajoled me into taking a couple of weeks off. (I now have to return the favour, which is going to be a toughie because her work ethic makes mine look like a half-articulated preference.) But the other is that I’ve been rewriting some core parts of the Cultist Simulator code base, so I can reuse more of it for BOOK OF HOURS.

The rewrite is on the beta branches on GOG and Steam now. There are some performance improvements (and probably some exciting new bugs), but the big visible change is an update to the modding framework – especially, integration with the Steam Workshop.

Our Steam Workshop page is named for the Invisible Serapeum: the library in EXILE which, unusually for a library, claims the patronage of the Forge of Days.

All these changes, including the Steam Workshop, currently only function with the beta (gateofhorn) branch. Please let us know about bugs at support@weatherfactory.biz

Uploading a Mod to the Serapeum

I’ve updated Marc’s original modding post here. Existing mods will need some changes, but it’s a matter of find/replace and renaming some files.

There are a lot more changes coming, but the ones above should, I hope, be all the breaking changes.

Have fun with this lot. My whole approach now is to make the Cultist code a bit more general-purpose. ngl, this is primarily for our own benefit – the more we can reuse it for BOOK OF HOURS, the better – but if we can reuse the same content framework for two very, very different games, then the most ambitious amongst you should be able to go properly wild with it. Welcome to the House without Walls.

13 comments on DAYBREAK IN THE INVISIBLE SERAPEUM

on DAYBREAK IN THE INVISIBLE SERAPEUM