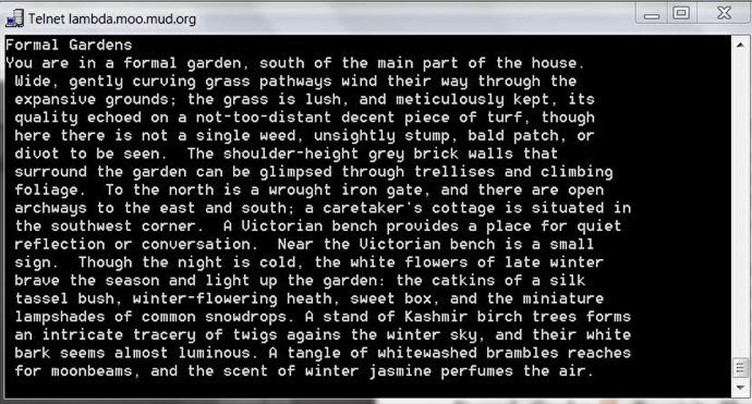 10.10.15
I didn’t talk about my own time in LambdaMoo, because that wasn’t really the point, but since you ask, I built a house in a very large mostly-dead dragon.

There was once a virtual world called LambdaMOO. It began when a researcher named Pavel Curtis recreated his Californian house inside a virtual space in a Californian computer, but the space was open to other players connecting from around the world. You could connect with a named avatar, chat, walk around and punch things by typing text commands –

Back up. It doesn’t sound impressive now, but it happened in 1990. This was the year of the first Wing Commander game, of the first Secret of Monkey Island. It was the year that a computer scientist in Geneva was writing the first web browser, and the year before the first website. The ZX Spectrum and the BBC Micro were still on sale. It was before Internet Explorer, before home Internet access, five years before the first graphical MMO. You connected to LambdaMOO via Telnet and a green screen terminal.

It wasn’t the first text-based virtual world. There’d been a number of text-based MUDs (Multi-User Dungeons) in the 80s. These were LambdaMOO’s immediate ancestors – the MOO stood for MUD, Object Oriented’. Curtis was working for PARC, a division of Xerox which did advanced, experimental, unexpected things. (PARC invented an alarming number of things, including fripperies like the laser printer and the mouse.) LambdaMOO was an attempt to see if something serious could be built out of online social environments like MUDs. Which were obviously trivial things of limited interest, back then.

Anyway, LambdaMOO was the first shared world which could be modified and extended by its users through the MOO programming language. So this was the frontier. And like most frontiers, it was both wide open and pretty rough. It was an all-text experience with a complex syntax, prone to unpredictable and devastating lag. But you could extend it: modify your character, add verbs, use the @dig command to create new rooms leading off existing ones –

Back up again. This isn’t about nostalgia. I want to point out that the first thing Curtis did when he created a virtual world was to add geography – in other words, make it non-trivial to get around. The house was a good-sized place with a complex internal layout. There was a street, there were gardens, there were sewers full of goblins underneath the house. You could easily get lost in that alone.

But behind the living-room mirror you could find the Looking-Glass Tavern, where new players generally attached the entrances to their homes. Those homes were where the geography got really complicated. The further you went from the mundane core of the house, the stranger and more delightful everything became, and the more complicated the the geography was. LambdaMOO had its share of haunting and delightful and inventive places, and all the players who added them wanted to make them effortful to get to. The LM Architectural Review Board had its hands full dealing with applications from people wanting to go beyond their location quota.

So it took real effort to find your way to the interesting places – but it took real effort from the builders to make it require real effort. Distance doesn’t exist in a virtual world unless you put it there on purpose. Remember, this was a world designed as a social environment. The whole point was to put people in the same room and let them talk to each other. But unless there’s distance, no one will take it seriously as a world. Unless there’s distance, you can’t explore: you can only browse.

Of course, once you’ve explored the world, distance goes from device to inconvenience. Originally LambdaMOO players had (I’m told) to create rings of teleportation, and use them to travel around. By the time I got there, the @teleport command was built in. Curtis went to all that effort to make the world hard to traverse, and one of the first things the inhabitants did was to abolish distance. Because distance is also a pain in the arse.

This is our old friend the Skyrim Problem. The first time you climb the Throat of the World, it’s an experience. It takes so long and you rise so far that there’s a real sense of achieving the sky. And once you reach the summit, when you look down at the road from Whiterun, it means something because you travelled that road. (Meeting the frost troll and having to backpedal and kite it to death with fire spells and keep reloading until that works spoils the mood, but that’s my fault for rolling a mage.)

I’ll remember that moment (the summit, not the frost troll) long after I’ve forgotten the dragon fights. But you need to go back and forth a dozen times from the monastery at the top of the mountain, and of course you’re usually going to use fast-travel. You’re going to use fast-travel to get from one end of Skyrim to another, to tick quests off, to get loot home in a hurry. You’ll stop experiencing the main point of Skyrim – all that stunningly realised distance.

And, you know, that’s actually okay. We often curate our experiences. The credit sequence of True Detective is stunning, but you might want to fast-forward when you see it for the tenth time. You don’t always listen to an album from beginning to end. You don’t have to eat all your vegetables every meal.

And, you know, that’s okay, too. But it’s not a solution, just a difference of approach for a few hardcore players. It’s not practical for many players to spend that amount of time walking around a map. When we complain about fast-travel, what we actually mean is, we wish we could relive the first part of a game – that sweet unfolding of possibilities – over again. We resent fast-travel because we think it’s robbed us of that experience, but usually that experience is already past.

The fact it’s past doesn’t mean it’s gone, though. Once you’ve experienced the geography, it’s in you. It’s part of your story. If the experience is a good one, you’ll regret its passing, and you’ll yearn to revisit it – but that’s the nature of the past. It can only be grasped in moments, and in its absence.

Julian Dibbell wrote a memoir of his time in LambdaMOO, My Tiny Life. He describes an attempt to get an overview of the essence of the LambdaMOO environment – a bird’s-eye view, a map. He used a hot-air balloon. But it was a virtual, entirely text-based hot-air balloon. Its output was snippets of descriptions of random locations, as if he was drifting over each one in turn. It could probably have spat out an ASCII map or something, but that wouldn’t exactly have given him the essence of what he was looking for. (If this sounds daft, remember this was a journalist in an experimental environment twenty-five years ago.)

So he’s pottering around the notional sky in his virtual balloon, and it hits him: the map really is the territory. The best map of an invented place is the place itself, because every distance is there by design. You can only read that map by travelling the distance. And reading it is like reading a novel. You can’t expect the experience to remain the same the second time, whether fast-travel is enabled or not.

Pavel Curtis left PARC Xerox to found a company that built conferencing software. Microsoft acquired that company, and the software became Microsoft Office Live Meeting which became Microsoft Lync which became Skype for Business. That’s what LambdaMOO spawned, and that’s how the dream lives on. You can find that depressing, if you like. But I’d like to believe that under every Skype for Business conversation, there’s a sewer full of goblins.

7 comments on Building the Frontier

on Building the Frontier