“Around 1890, in the Third History, the Crowned Growth could be perceived through the White Door.”

Oriflamme’s, Lot 5, Auction 5th May ’57. Fragments of the notebooks of ‘Parsival’, recovered from the wreck of Mr Strathcoyne’s private library.

Herein I have set down  my recollections of my time with the Society of the Noble Endeavour. I write in haste & may be lacking clarity. Make what you will of it.

In preparation for the Riddle of the Stag Door (which I will describe later) a dreamer passes through the White Door, not once but many times. The White Door was known anciently as the Bone Door or the Ivory Door. Speech may not pass its valves, and dreamers are mute when they enter the House.

The White Door is fickle. I had prepared the proper tisanes & I had some hope of entrance that night. You should know that once one has entered the Mansus, the memory of it hooks & tears. One recalls its stairs and galleries and the light of its windows with a sentiment like that of half-waking memories on clear autumn mornings… I found then that I prepared my limbs for sleep with the trembling anticipation of one who awaits a fickle lover, and that sleep, indeed, was fickle…

But at length I walked again in the outer precincts of the Mansus, that place we call the Bounds, which we dare to believe above the Wood. The Bounds breathe & change – they are some say the limbs of the House – but I have never subscribed to the notion that the House is an organism. It is not stone, but it is more like stone than flesh. That night they were hued with what we in the Society called the perilous colour. I had a considerable apprehension, before I ever saw the door, that this was not a night to be abroad in the precincts of the House of the Sun. But one does not surrender easily even the White Door, and I had high hopes that year of passing the Stag Door early… so on I went.

I rounded the high rock that  is called the Temple of the Wheel, and the White Door came in view. There was a crowd of the Dead before it. Even at that distance, it was clear that is what they were. You may be aware that some Dead pass the White Door – their speech is taken from them, as the speech of dreamers, and that is why the Dead we meet in the Mansus are so often mute. But their movements, I quickly saw, were not the movements of the Dead.

I shall say there was a river flowing through the door. It was not a river, and neither was it pus, nor joy, but when I tried to articulate it better, my pen snapped in my hand. I apologise for the apophatic ellipsis, Madame, but I have no wish to tempt that Hour into my dreams. The Rising Spider wishes dominion, but the Growth wishes only to infect and become. I do not believe the Bounds are the limbs of the House, but I must aver that the Dead that night had become the limbs of the Crowned Growth. Should you meet them, do not permit them to touch you. Do not even look upon their faces. I thank the Sun for the Horned Axe, the Black-Flax, the other older Hours. Without them I wonder whether we might not all be the Growth.

I did not pass the White Door that night. I ran crying into the night and I recollected myself only curled among the roots and blades of the Wood. To that episode, I ascribe my affinity with the Moth…” 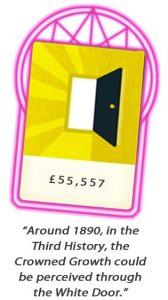 1 comment on “Around 1890, in the Third History, the Crowned Growth could be perceived through the White Door.”

on “Around 1890, in the Third History, the Crowned Growth could be perceived through the White Door.”

Leave a Reply to Not Fenimore Cancel reply