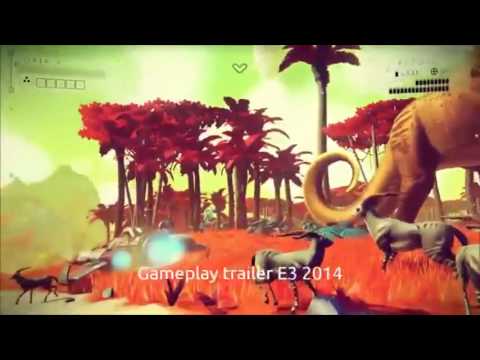 I wrote this fairly sympathetic piece about No Man’s Sky. It got a lot of comments, many of them from angry people who wanted me to agree that SEAN MURRAY LIED, and now #gamergate has found me on Twitter. I don’t want to get into any kind of Twitter argument. I do want to say some things that might calm you down, or suggest another perspective, if you’re not already too angry to read. That’s what this post is about.

Some throat-clearing. I have no special insight into the production of NMS, and my sole contact with HG is that I once asked Innes McKendrick on Twitter whether there was going to be milk in No Man’s Sky at launch. I paid full price for NMS, and I’m not ‘the gaming press’ unless you count my frankly obscure and eccentric monthly column on Eurogamer. And if you think that SEAN MURRAY LIED (with or without the all caps), do read this long good piece by Paul K-T from Mode 7. I agree with him that Sean told the truth, and was sometimes a bit vague or intemperate, but has delivered the game he promised. If you’re boiling to show me this link again, go read Paul’s points first.

I think my argument in the column stands – that some games are more about what you do and some are more about how you feel, and that some people expected NMS to be more of a doing game. If you’re one of the people who’s fed up with NMS because you were expecting specific features, then I suggest quite tentatively that the existence of better wildlife or crashed freighters wouldn’t have radically altered the experience. But I know there are people who never really watched or cared about the trailers that suggested those features, because I’m one of them, and so also are literally all of my gamer friends IRL.

Right! I want to talk about what it’s like to be lost inside developing a game. But first of all I want to give one reason you don’t need to worry about the games industry disappearing up its own toxic post-truth arse spiral:

IT HAS NEVER BEEN EASIER TO FIND OUT EXACTLY WHAT A GAME IS LIKE ON LAUNCH DAY, AND IF YOU HAVE ANY DOUBTS, YOU CAN WAIT A WEEK AND YOU CAN BE ABSOLUTELY SURE.

It’s not Kickstarter, it’s not politics, it’s not marriage. You’re not buying land in the Wild West or shares in a startup or payment protection insurance. You’re not being sold drugs or gambling. Whatever you think of Metacritic and the gaming press, a couple of days after launch they had done their job, and you could find out with one Google query that NMS was a 70/100, or in English, Buy With Caution If You Like That Sort Of Thing. With another Google query you could find out that lots of people had been expressing concerns for months about whether it would live up to the hype.

Folks, businesses should be honest, and I wish more of them were (and I’ll say it again, I think Sean Murray was more honest than most). But this is not the 1980s or the 1990s or the 2000s when you could walk into a shop and pick a game off the shelf whose quality you had no idea of unless you’d been lucky enough to pick up an honest print magazine. You can find out whether a game is likely to be worth your quids in a matter of minutes. I know it stings if you haven’t got what you hoped, but the good news is this is a foolproof way of finding out in future. I don’t want to be a dick about this, seriously. I know what disappointment feels like. But businesses have been trying to sell us their products for something like seven thousand years, and we have never in all that time had a better way to tell if it was worth our money.

And I’m going to go on record and say that if I run a Kickstarter (and I will) don’t put money into it unless you want to trust me on my past record, and when I release a game (and I plan to) don’t buy it until you’ve read some reviews.

Now a point about what it’s like to be on the other side of game development.

Back when I ran Failbetter Games, I led production on a game called Sunless Sea. We were really transparent on SS. We ran an edge-of-desperation Kickstarter that saved our collective company arse, we ran a beta, we had it in Early Access, we blogged about it, we talked to our community constantly, it was in front of everyone constantly. We found that the old-style turn-based combat system wasn’t popular, so after a long conversation with the community we replaced it with a better real-time combat system. To make that happen, we put back release by six to eight weeks, which is a lot of money when you’re a small business making your first game. We did it because we sincerely wanted to make the game better. And then at launch a minority of players got VERY ANGRY with us because they’d seen in the Kickstarter, and in early gameplay videos, that the combat was turn-based, and they’d bought the game without realising it had changed.

I’ve left Failbetter, and I don’t make any money now from sales of Sunless Sea, so I can EXCLUSIVELY REVEAL why this happened. It’s like this.

When you are a small team making a game you’re passionate about, especially if you’re on the technical or creative side, you think about the game ALL THE TIME. You think about it in the bath, you think about it on the way to work, you burn your kid’s dinner because you’re thinking about it. Your other half has to ask you a question three times because you’re thinking about a design problem. You close your eyes and see code. You leave bills unpaid because you’ve nearly fixed this bug, finished this feature, written this story, found a way to make it all fit together. If you’re working for a company like Failbetter which is stern about doing too much overtime, you mean to turn off your computer at six and it’s seven before you realise it. If you’re working for a company that encourages crunch, it’ s much worse.

So for almost two years, Sunless Sea was my whole life. I didn’t often think about communicating its exact state to the couple of thousand people who cared because I was trying with my whole heart to make a good game, not even for the players, but for me, because it was an obsession. I noticed just now while I was reading this article that there are still some (minor, harmless) references to things that don’t exist in the game on the Failbetter site. We were just busy making the game and never thought to take them out.

Hello Games had been making No Man’s Sky for a lot longer than ‘almost two years’. If you have any doubt that Sean Murray was a man obsessed, fire up one of those YouTube interviews and see the look in his eyes. They evidently cared passionately about the game they were making, and if they didn’t go back and update the videos, it wasn’t because they thought players were more likely to part with money if they thought there was a cool diplodocus in this game instead of the very preposterous thing in the very funny video with the kazoo here. It was (I would bet a nipple, preferably my left) because they were busy getting the algorithm just right on this tree shape generation and oh god Marketing is on the phone again and they want another video and it’s on like H:/assets/promotional/videos/new/2/dinosaurs, isn’t it? was that from 2014 or 2015? yeah that’s probably okay. Right, nearly finished, this is going to be SO COOL oh crap it’s broken hang on –

I would bet (a nipple: the right one, if the left one’s gone) that if Hello Games neglected to remove any inaccurancies from early videos, it was not because they were trying to squeeze a few more quids out of the audience. If they’d wanted to make money out of suckers, they’d have gone into investment banking. It was because they were a gang of overreaching obsessives who were writing code up until the last minute they could, and then some. And I’ll tell you something else, as someone who’s made a good but imperfect game and feels every imperfection like a birthmark: you might be disappointed. But however many squillion quids Hello Games have made, if you are, they’re a lot more so.

11 comments on The other post about No Man’s Sky