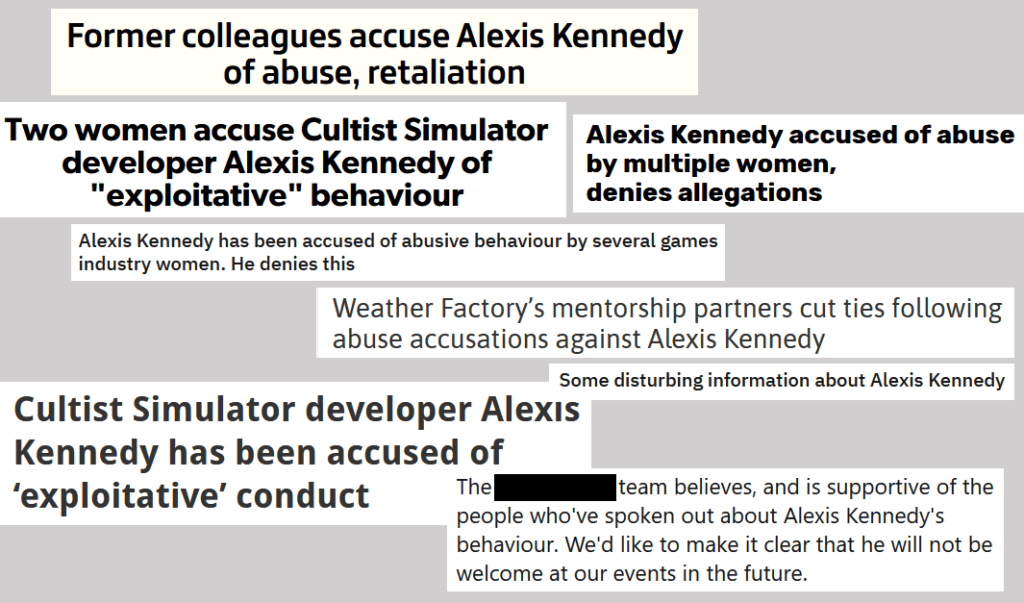 I’d like to share my story in support for #stopcyberbullyingday. I’ve been dealing with personal and professional attacks via the internet for the better part of the last year. In that time, I’ve seen at least three people take their lives because of bullying on social media. Here’s what happened to me.

I woke up one morning in August 2019 as Lottie Bevan, a thirty-year-old video game developer. I owned, along with my long-term fiancé, a small indie games studio that had just scaled up to five people. I’d made Cultist Simulator, an indie success story that had won a bunch of awards and made more money than expected. I was a current BAFTA Breakthrough Brit, and a month earlier we’d won big at a high-profile British awards ceremony. I was the happiest I’ve ever been.

That day, we’d finalised the most in-depth mentorship scheme in British indie games and were a week away from launching a £100,000 Kickstarter for our next project. It was also the first anniversary of a feminist meet-up I’d started, Coven Club, which organised monthly meet-ups for women in the industry to counteract sexism and female isolation in games.

By the end of that day, I was crying on a pair of London constables as they wrote up ‘malicious communication’ case notes from literally thousands of tweets which said my partner was ‘an abuser’, my company should fold, my employees should leave, my mentorship scheme should shut down, and my career was a front for harming women.

Two ex-lovers of my fiancé, who were game developers associated with his ex-studio, had tweeted that my partner’s historic consensual relationships with them had actually been abusive because he’d been head of a studio. One person had never been his employee, the other had been a casual partner who’d accepted a job at his studio while they were dating. But that was enough. Their friend, another developer who’d never had any sort of non-professional relationship with my partner, tweeted her support. The ex-studio, with whom we were not on good terms, tweeted in solidarity.

It snowballed. None of this has any real-world counterpart – no complaints or allegations outside of social media – but here’s what just some tweets can do.

This had direct and immediate professional repercussions for me. All employees resigned; we had no choice but to cancel the Kickstarter; I had to shut down Coven Club; we lost our publishing deal. We still lose business deals, even today, because of those tweets.

Over the next year, as we dealt with the fallout and more rumours came to light, I began to realise something. The attack on my fiancé had been deliberately public, but I had privately been a target too. As a young(ish!) up and coming woman in the industry with prominent feminist initiatives, I wasn’t a credible target for public movements like #metoo which gave those tweets about my partner such resonance. So the attacks on me were subtler.

Here’s a sample, from the several hundreds of messages I’ve received over the past ten months. They appear regularly and consistently across a range of sites on social media. Some are from anonymous or encrypted accounts. Others were written, said or done privately by the same people who publicly attacked my fiancé.

I am a non-confrontational person who, with the exception of being successful and dating my fiancé, has never inspired the vitriol of the internet before. If the above could happen overnight to me, without me doing anything differently one day to the next, it could happen to anyone.

I want to make two points that I haven’t seen elsewhere. Firstly, that you can be someone who isn’t powerful, who isn’t a man, and who isn’t even actually accused of anything – and if someone has it in for you enough, you can still wake up one morning to a new reality of sustained, inventive online harassment and bullying. This applies to game developers, it applies to children, it applies to anyone with a social media account. My experience put me in trauma therapy, and it certainly freaked my therapist out: she relies on good reviews for clients, which could easily be destroyed by even one or two people deciding they want to hurt her.

Secondly, nobody over the past year fitted the usual profile of a ‘troll’. Harassment on the internet is closely associated with MS Paint-avatar accounts that tell women they’re ugly and that people should kill themselves. I didn’t get any of that. Almost all the nastiness I’ve experienced has been from actual people: people who play my game, people I worked with, people I met at a conference years ago, people I follow(ed) on Twitter.

We are all, every day, offered opportunities to join a public dunking we know nothing about, or say something mean about a celebrity we know we’ll never meet. But I can tell you first hand that the person at the centre will notice what you say. They might not see your particular comments, but you contribute to a tapestry of hate that makes the subject of it think that everyone – everyone – has decided they are the worst thing that has ever crawled across the face of the earth. If there are any exacerbating circumstances in their life – mental health, financial concerns, professional ramifications, lost friendships – those non-troll-y comments can and will make people want to die.

There are only a few people who actually want to hurt me. Most of the people involved were just joining in on Twitter, or expressing an opinion that got them upvotes, or engaging with the particular topic of the day. But these sorts of interactions on social media point the infinite hate machine of the internet at someone forever. You cannot control what the hate machine does. Whether you think someone’s done something bad, whether you know someone’s done something bad, whether you heard a rumour or got a weird vibe from someone or just have some personal beef: nobody deserves large-scale, endless, uncontrollable harassment online.

I am not the first and I will not be the last person who’s attacked, privately or publicly, from behind a screen. Cybersmile have a lot of resources on the various types of online harassment you might encounter, and I’m writing up a list of my own resources and advice from a year of dealing with this new world. But the bottom line is this: this behaviour is not normal. No one acts this way in real life apart from school bullies and stalkers. Don’t let a screen dissolve your empathy for another human being. Online harassment is humans, at scale, at their most vicious. Please don’t ever join in.