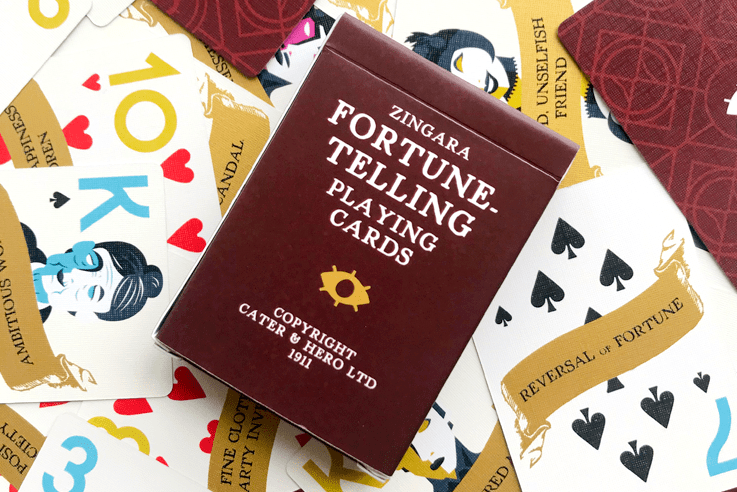 THE SIBYL’S LEAVES OUT NOW!

The long-awaited newest edition to the Church o’ Merch is finally here! The Sibyl’s Leaves: Playing Cards for Divination, Fortune-Telling and Augury is now available in the shop! 🥳

“THE SYBIL’S LEAVES; or, a Peep into Futurity!” (sic) is a real deck printed in the 1820s and 30s. It haunts me because I can find lots of amusing old reviews of it but no description or images of the deck itself. It’s a cartomantic ghost apple whose soul has gone but whose shape remains.

William Hone mentioned it in 1831 in one of the popular game compendiums he produced when he wasn’t being a proto-investigative-journalist and kickstarting freedom of the press. He thought:

“The idea of telling fortunes at home is very pleasant; and the variety of ‘the Sybil’s Leaves’ assists to as frequent opportunities of re-consultation as the most inveterate craver can desire. A lady condemned by one of the leaves to ‘wither on the virgin thorn’, on turning over a new leaf may chance to be assured of a delightful reverse; and by a like easy process, a ‘disappointed gentleman’ become, at last, a ‘happy man’.”

In the same year, the wonderfully-named Reverend Blunt interpreted the deck through a moral lens. He usually wrote quite boring-sounding books about early Christian exegesis, but The Sybil’s Leaves caught his attention as he moonlighted as a contributor to the popular New Monthly Magazine:

“Unlike fortune-telling cards in general, they are free from all vulgar associations; and their claims to notice are, the universal applicability of the prophecies and fortunes they dispense, the unusual poetical ability displayed in the verses, and the nice attention to propriety and good taste exhibited throughout.”


Speaking of being free from vulgar association, our Sibyl’s Leaves really are based on a genuine early nineteenth-century fortune-telling system, popularised by the famous Parisian seeress Madame LeNormand. But our version uses a unique system of my own devising, because the original needed a bit of updating to avoid, erm, quite a lot of racism. But that’s gone now! Yay!

Anyway, the absolutely earliest reference to the Sybil’s Leaves I can find is The Gentleman’s Magazine of 1826, which calls it simply ‘a Christmas Game’ and moves on. But a Christmas game it can be again if you order quickly enough! I can’t guarantee the decks will make it to international addresses in time for Christmas, but I’ll be packing ’em more quickly than usual to give them the best chance I can. 🤶

Full product deets on the Etsy page, but the key thing is you can use this 52-card deck with shiny gold bits on to maybe tell the future and to definitely play any card game that requires a normal deck of cards. Also, you can finally get merch with Neville on it. What are you waiting for?!

2 comments on THE SIBYL’S LEAVES OUT NOW!

on THE SIBYL’S LEAVES OUT NOW!