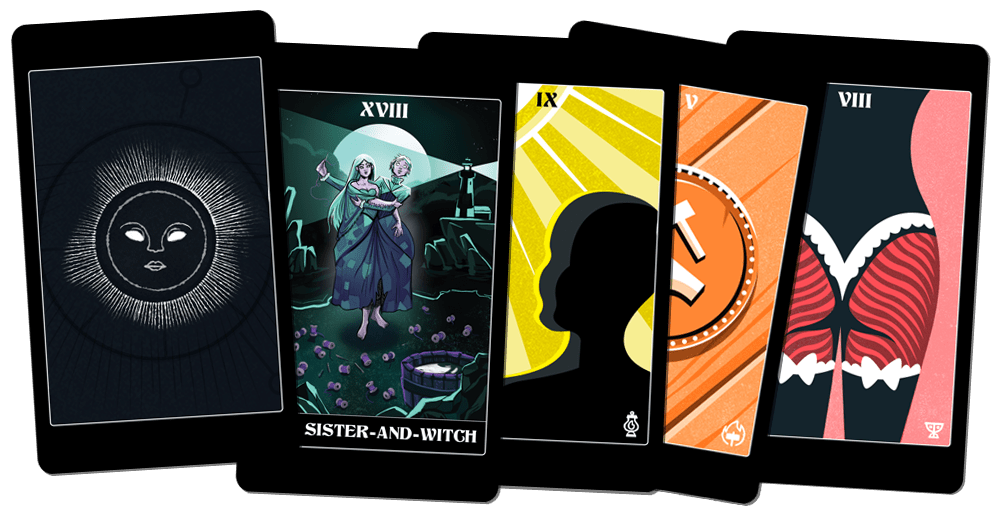 “Got your book. Pretty good condition, too. Bit blurred round the edges, but the little fellow’s taken good care of it…” (January 15th-ish, 1906)

Yes! This should really be called ‘NOV #1: WESTENRA’, but this producer is Off The Rails. You can’t stop me. I’m naming this sprint update after the rather curious case of D and The History of Inks, written to a Dr. Serena Blackwood at the Office of the Curia.

Click to read photographs of the original letter, long now lost to a fire. Or if you struggle to read D’s handwriting – well, she should have delegated to Propsy, now, shouldn’t she? You can scroll down to the bottom of this post for a transcription in plain text, anyway.

This sprint I’ve also been hard at work with some new merch. I announced what that was to the select few of you who follow me on Twitter: a 78-card, full-colour, totally illicit TAROT OF THE HOURS.

(The dark background detail on the card backs / box are quite hard to see if your monitor isn’t set to ‘Mental Artist’, so if all you see are white lines on black, TRUST ME THERE’S MORE THERE.)

I’m waiting to receive a test print of the whole thing, to check all the art looks nice. Then it’s a matter of buying a tonne and making a new listing on the Church of Merch.

The question in the meantime is: who are the Pages, Knights, Queens and Kings of each suit? And which Principles correspond to Swords, Wands, Cups and Pentacles? Try your luck in the comments below, and I’ll reveal any of the correct cards in next sprint’s update…

The rest of this sprint was devoted to, oh, you know, launching our Russian beta on Steam and participating in this year’s Singles’ Day, which you probably all know is a manufactured celebration of both being single and being in a relationship which Alibaba co-opted to sell stuff, but hey, it’s 2019, and it makes me feel all Blade Runner-y to put Chinese text on my designs.

Any Russian speakers waiting until the beta’s complete have only another WEEK to wait until Russian’s live in the main game on Steam, GOG and Humble: that update’s coming on Monday 25th November. So yay, my drugis, which is the only pseudo-Russian I know from reading A Clockwork Orange when I was sixteen.

Got your book. Pretty good condition, too. Bit blurred round the edges, but the little fellow’s taken good care of it. Not what I expected, though, rum business all round. Tell you how it was.

Trail in Venice long cold, obviously. They still tell stories about old Hokobald, say the place is cursed now, but it’s mostly cursed with rising damp. Don’t know how anyone lives there. Anyway, no trace, so I thought, all right, D., my girl, get your head down, get seventy-seven winks, see if the Sage-Knight’s entertaining, he’ll know what’s what.

You’re reading this and thinking, come on, D., you know better than that, Sage-Knight’s a bit high in the Mansus to be talking to Raw Prophets, what? But here’s the thing, Sage-Knight knows the odd Ivory, Ivories know the odd Thirstly, Thirstlies know Raw Prophets. So I’ll put the word out.

Sage-Knight’s in a helpful sort of mood, so we both have a cup of that wine of his and then another cup and then another cup and we get to gossiping. He’s all right for a Name. Shame he doesn’t keep proper port, even dream-port, but he’s all right for a Name. And I wake up and I pop out for a dawn smoke and a bit of the old practice and when I get back inside there’s an address written on the mirror. Not bad for a Name at all.

Address is in Vienna. Now you know how I feel about Vienna, never quite comfy there since all that with the Club, but I think, Serena’s a good sort, owe her a favour or two, not so far on the train. Off I pop.

Vienna, two days on. Find the address, have a snout about, you know, see what’s what. Nasty little den, full of the wrong sort of the wrong sort, and they’ve got their own little shrine for the Raw Prophet. (Sage-Knight gave me its name, I tried to write its name, won’t fit in this alphabet. Let’s call him Propsy.) Little cult for Propsy. Now you know me, Serena, live and let live, all sorts, but a shrine to something like Propsy, I always thought it’s like building a shrine to a lamb chop. You’ve seen Prophets, haven’t you? They look like a horse stepped on a starfish. But bigger.

But, dashed odd thing… Propsy’s not a bad sort. Can’t talk, of course, but the little feller can write. And I don’t just mean write like I’m writing this letter, express itself, put its point of view, sort of thing. I mean it’s a calligrapher. Dashed good calligrapher. Every one of those little tentacle things, good as a Japanese paint-brush. Where does it get the ink, you’re wondering, aren’t you, Serena? Be glad I’m not telling you.

Long story short, Propsy reckons it wrote the ‘History of Inks’, reckons it was stolen, reckons all sorts of the worst about H.H. (Sorry, Serena.) So we had a good old chat, and I did knock it about a little bit, but we agreed in the end, and it gave me the book back, but it wanted paying. Seemed fair enough. And I’ve added a line to my bill for that. Bit of a sum, I’m afraid, try not to kick. Sure you won’t, know you’re a good sort.

So here you go, bill, book, all we’re missing is a candle, ha ha! I’ll be by again for the Equinox. Could use your help on a thing with the Mausoleum. And the Club, actually. Bit of a business, there.

PS! Propsy wants proper attribution. Name in the catalogue. Course, can’t write its name here. Won’t fit in this alphabet. Hope you can sort that out. Might cause a bit of a stink if not. Leave it with you. Best of luck. D.“

6 comments on “Got your book. Pretty good condition, too. Bit blurred round the edges, but the little fellow’s taken good care of it…” (January 15th-ish, 1906)

on “Got your book. Pretty good condition, too. Bit blurred round the edges, but the little fellow’s taken good care of it…” (January 15th-ish, 1906)