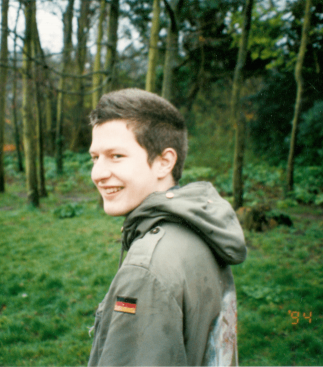 This is a post about depression and suicide, not about games. If you work in the games industry, you certainly know, or will know, someone who suffers seriously from stress and depression. That person may be you.

Today would be the forty-second birthday of my brother, Hugh, if he hadn’t killed himself when he was twenty-one years old. Hugh was, as the cliché has it, a brilliant and troubled youth. He left school with exceptional qualifications; took heroic quantities of hallucinogenics; became convinced he had a secret destiny and was being interfered with by malevolent spiritual entities; was committed to a secure institution; was released, increasingly rational but very depressed; unexpectedly killed himself half a year later, two days after Valentine’s Day.

The thing about the death of a young person, as many of you will know, is that their ghost comes to the door at unexpected times of day and night. You think: he’d be forty-two. I wonder how he’d get on with my kid? I wonder if he’d still like a smoke, or if he’d have given it up for his health? I wonder if he’d be looking back on his bonkers youth from the comfortable position of a real career, or if he’d be homeless and desperate and we’d still be worrying? I imagine him occupying a precarious, happy-ish position in the digital economy, doing bits of freelancing, meaning to get a pension, having occasional life crises, coming over to crash on my sofa for a week (to my delight) and then hanging around for a month (to my less delight) and using up all my shower gel. But maybe he’d be a biochemist. Maybe he’d be a primary school art teacher. Maybe he’d be an MP. He might be a game designer. He was a smart guy: one of those people whose talents branch in so many directions they don’t know what to do.

(He was also very small but very good-looking and quite a hit with both the ladies and the gentlemen and he did put himself about and he was never very careful. I wonder sometimes if I have a nephew or niece I’ll never meet. I suppose it’s worth saying: if you did have a thing with a charming bonkers little lad from Oxford and got pregnant on the back of it, get in touch. For that matter, any child he had would be at least twenty years old. So if you’re that child, get in touch.)

I want to indulge a couple more memories of Hugh, and then I want to say the meaningful thing.

The vicar at Hugh’s funeral (himself quite a character) said in his eulogy: “I remember when he asked me to exorcise his house on the Cowley Road, where he was concerned that he was troubled by spirits. I remember visiting him in what he called his ‘bender’, a desperate place on the banks of the Wolvercote Canal; and I remember visiting him in what I believe was known as the Runis Secure Unit, at least up until the time of his second escape.” It got a big laugh. It’s quite unusual to get that big a laugh about escaping from a mental institution, at a funeral.

Hugh was asked, at a mental health tribunal: ‘How do you think those people felt, when you jumped out of their wardrobe?’ ‘A bit surprised at first’, he said, ‘but then excited and happy’. Even when completely out of his tree, my brother meant well.

The meaningful thing is: please talk to people. The statistic I’ve heard is that on average, one person in a full double-decker bus is thinking about suicide. Often, especially in a culture like the UK, it can be excruciatingly hard to reach out to people who seem sad. WHAT IF YOU SAY THE WRONG THING WHAT IF YOU EMBARRASS YOURSELF. Well; maybe, but you’d be surprised how glad people feel, even to hear platitudes. Just knowing that someone gives a fuck can make the difference. And if you’re sad, or thinking about suicide, it can be even harder to reach out. WHAT IF THEY LAUGH WHAT IF THEY THINK I’M WEAK I DON’T WANT TO BE A BOTHER. It may well be that they’re over there thinking WHAT IF I SAY THE WRONG THING. Like the man said, ‘only connect…’

Not knowing what to say is less of an issue than many of us think. I used to volunteer with a support hotline, and the thing that consistently surprised me was how often someone, having described a life that made my eyes widen and my stomach lurch, would end the call by saying ‘I feel so much better for having talked’.