When you hear the phrase ‘choices in games’, what do you think of?

If you can’t read the text, the player’s just moved a Great Prophet to a city and chosen to use them up to build a Wonder 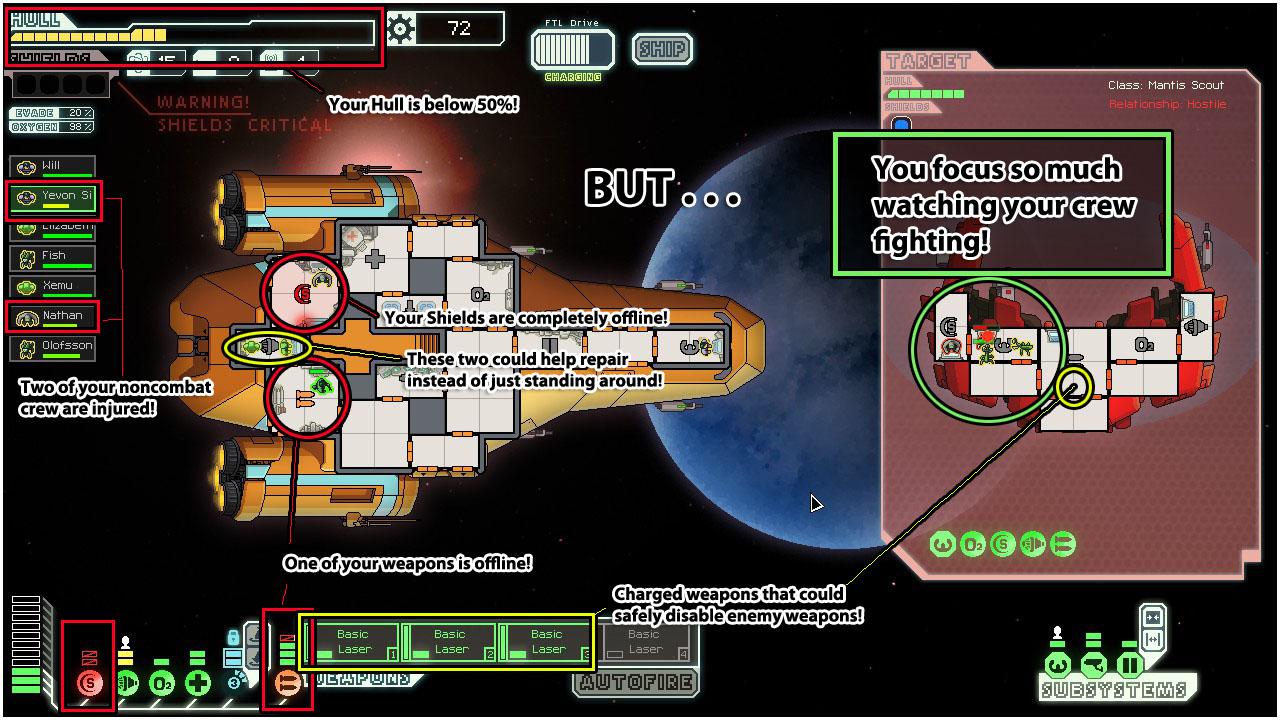 The helpful captions aren’t mine – they’re from a Steam strategy guide. I love the hectoring tone of the advice. ‘PAY ATTENTION, ENSIGN!’

I have literally no idea what’s going on in this screenshot, but I take it on faith that it’s something complicated and interesting that 2% of my readers could explain to me.

The first three sets of choices are all what I’m going to call tight choices: at a specific point, you have a specific set of options. You pick one and move on.

The second three sets of choice are all loose choices. You don’t have to make a choice at all: you can just watch things happen. When you do make a choice, there are often bundles of similar choices (use the Prophet here or in the next city over; repair the shields now, or in five seconds from now).

I didn’t want to say closed/open or finite/infinite because I don’t want to suggest a value judgement. There is nothing fundamentally better about the second kind of choice.

All the tight choices above are all choices from explicitly narrative games. This isn’t a coincidence: narrative games tend to be more scripted experiences. But lots of games contain both kinds of choice:

In fact, this is what we expect from a CRPG. You do your walking, killing, spelling and looting in a 2D or 3D world as loose decisions – do I cross the lake or look for flowers on its edge? do I do some or all of the quests in this zone first? and when you need to make important or characterful decisions, you usually make tight decisions in a dialog tree – do I nuke the city or not? Do I side with the templars or the mages? Which school of poetry do I pick?

So I said above that narrative experiences tend to be more about tight choices. And even in a hybrid game, the most narrative-y bits are tight choices. But there have been, and are, attempts to create narrative games that rely more on loose choices, and some of these attempts have been really, really fun. This is where Cultist Simulator comes in.

Grand Ambitious Projects often try to solve a big problem in interactive storytelling – sometimes even the general problem. I’m generally pessimistic about their chances (although I think they often throw up fascinating insights along the way) and I don’t have the ability, inclination or patience to do that. So I want to be clear that I’m not trying to solve any big problems here, I’m just trying to do my own artisan indie thing over in the corner. Right? Right.

All of these have scripted material, of course. But they also have a game-mechanic layer that you spend most of your time interacting with, where you make loose decisions constantly to narrative effect. That’s what interests me right now – though I don’t have any grand reason for this beyond creative curiosity. So here’s my thinking for Cultist Simulator.

I want to make a narrative game about the tension between the prosaic and the mundane, and the temptation of the sublime, even when it’s self-destructive. So I could do something like this:

That looks familiar, doesn’t it? Tight choices, branching or stateful narrative, something like Twine or Ink or a homebrew system. I’d probably do a decent job and I’d have fun making it. But that was very close to the kind of thing I was doing at Failbetter (when I had time to write at all), and I want to bang some other ideas together.

So I’m going to try to do something like this (WIP; sorry for the horrible greybox and placeholder art)

We’ve got a basic dichotomy there; Work or Dream? (There are another five usual actions, but that’s where we start.)

We’ve got any number of things you could use your Work action on; here, we’re giving up some of your health.

When you use this combination, you’ll get a Labour activity which will count down, use up your Health and gain you some cash. You might instead have Dreamt using Reason or Health or a number of ritual implements; you might keep spamming Labour to get the money to live, or you might find a number of other ways to support yourself, or you might descend into obsession with all that dreaming. It’s the same thematic choice as you would have in a more traditional branching game – it’s just presented in a more systemic way.

I want to try to make the whole narrative of ambition and disaster out of these combinations and options – no menu-driven dialog-tree tight choices at all. That will last until and unless I find that this constraint is getting in my way. I’m not a purist about this.

I said above that loose choices aren’t better or worse than tight choices. They’re not. But it is what excites me at the moment. And when you have your Dream/Work dichotomy alongside a passel of troublesome Followers who may need disciplining, a Hunger that needs to be fed either Health or Followers, an ongoing Investigation by a stern gentleman in dark blue – and, if you want it, a work promotion – all as loose choices for the player to juggle as strategy alongside the narrative – then I think we’ve got something fun.

One half of Weather Factory. Writer, designer, coder and general man about town. He's the one who comes up with all the big ideas, which Lottie has to Deal With.
View all posts by Alexis Kennedy »