So sayeth ‘Baron Silence’, also known as Thomas Dewulf, also known as not the sort of person you’d probably invite round to play Pokemon Violet. He’s writing about Ouranoscopy, a Winter-inflected skill of particular interest to Husherists, members of the Haustorium and, probably, magical goths.

This week we have a crunchy BOOK OF HOURS progress report: AK’s been working on the start of the game, the end of the game, and the bit in between. Over to you, Alexis… 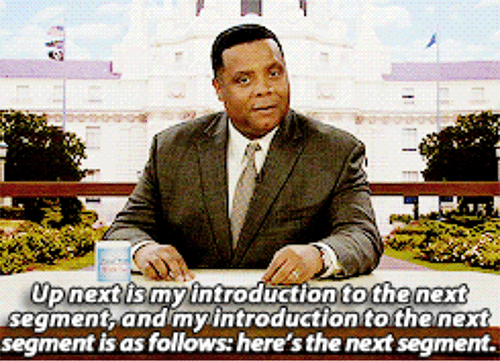 Most crafting systems are combinations of recipes. Rags + Thread = Bandages, Coal + Iron Ore in Furnace =  Iron Ingot. There’s limited room for creativity. In Cultist Simulator I wanted to allow more inventiveness – hence the aspect system. What do you get if you mix a lot of Forge with a little Winter and Knock?

One problem with this is it suggests everything works like a stewpot. You put a lot of Forge and a little Winter and Knock in a pot, you cry out ARISE MY BEAUTY and a Caligine comes out. It doesn’t matter if the Forge needs two followers or half a follower and eight lumps of coal. Except it does, because you need a Rite, which limits you to one follower and one lump of coal, or whatever. Rites are the unsung heroes of CS design. They make room for more elaborate and flavourful decisions about how to combine. Except except people quickly converge to the ‘best’ rites, the ones that don’t use up hard-to-obtain resources (like Tools) and do use up easy-to-obtain resources (like Influences). This is why we make experimental games, to figure out this stuff. 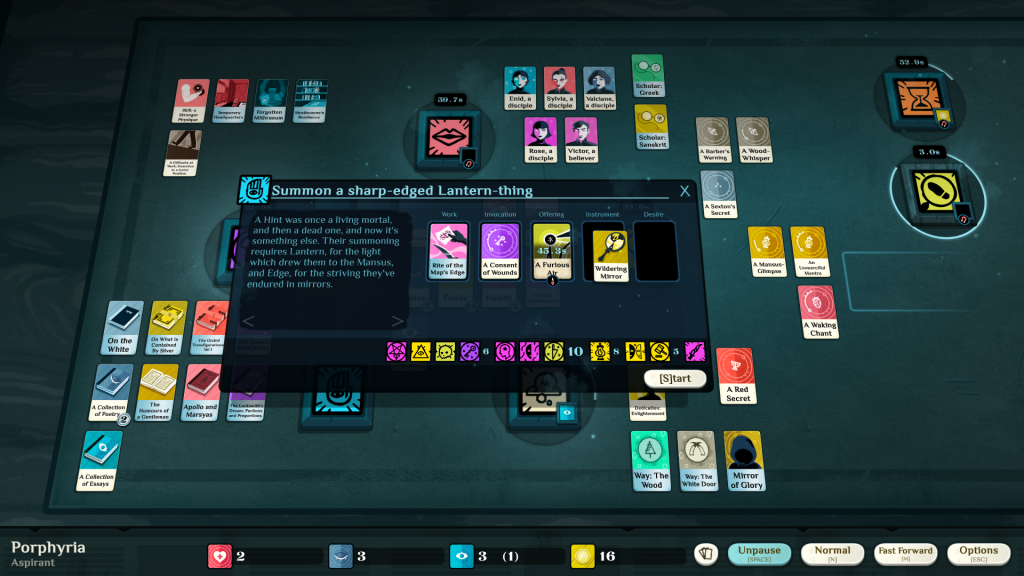 In BOOK OF HOURS, I wanted more ways through the narrative crafting maze. Originally I said Workstations (Kitchen Range, Garden Plot, Mirrors, Piano) were like Verbs in Cultist. They are, but they’re like verbs with pre-fitted Rites. Guest Beds accept a Visitor and a Beverage. Rest Beds accept an Ability that you want to recover more quickly, and a Beverage. A Piano accepts a Skill card, a Memory card, and up to three Ability cards, one of which has to be Chor. Mirrors accept a Skill, a Memory, an Ability, and a couple of Light Sources. If your Purifications & Exaltations Skill is really high, maybe you can make Inks of Power on the Kitchen Range or even at your Desk, but it’s easier to do with Alchemist’s Glassware given the limitations on what you can put in it. It’s easier to study Hushery at the Pale Desk than it is at Abbess Nonna’s Desk. And so on. I’m aiming for a system where resources keep being unexpectedly interesting in unexpected contexts as you unlock more of the game. As ever, we’ll see how it goes.

You can see a bit of AK’s design already in the room art Adrien and I are drawing. Lots of rooms have variations on basic furniture like shelves because, by last count, there’s some bananas number like 1,000 books we expect to have in-game. But some rooms also have a specific workstation that will open up new crafting options when you unlock that specific room, making it a strategic and rewarding (we hope!) choice which rooms you unlock in which order. Take the rather alarming gurney-looking thing in the third image – this is the Scrimshawry workstation in the rooms of Natan of Regensburg – which allows you to do all sorts of artisanal things with whalebone and netsuke and (if no authorities are around) bodyparts, too.

You couldn’t craft the same items – or use the same ingredients – with the giant secretary desk in the sixth image, because if you tried stuffing bodyparts into Thomas Dewulf’s desk you’d find yourself in an oubliette faster than you could say ‘I regret my previous life choices’.

From left to right, then, these rooms are: Solomon Husher’s study, the Chapel Ascite, Natan’s laboratory, the Watchman’s observatory, the Abbey Church nave, Thomas Dewulf’s study, the cloister, and the infirmary.

I can also share a first pass at Hush House itself, perched like a owl above sepulchral hills. Our whole art style is about leaning into the unreality of things, and into theatrical, dolls-house-like artifice. So we’re testing out effects like this night-time scene – have a look at a WIP version: 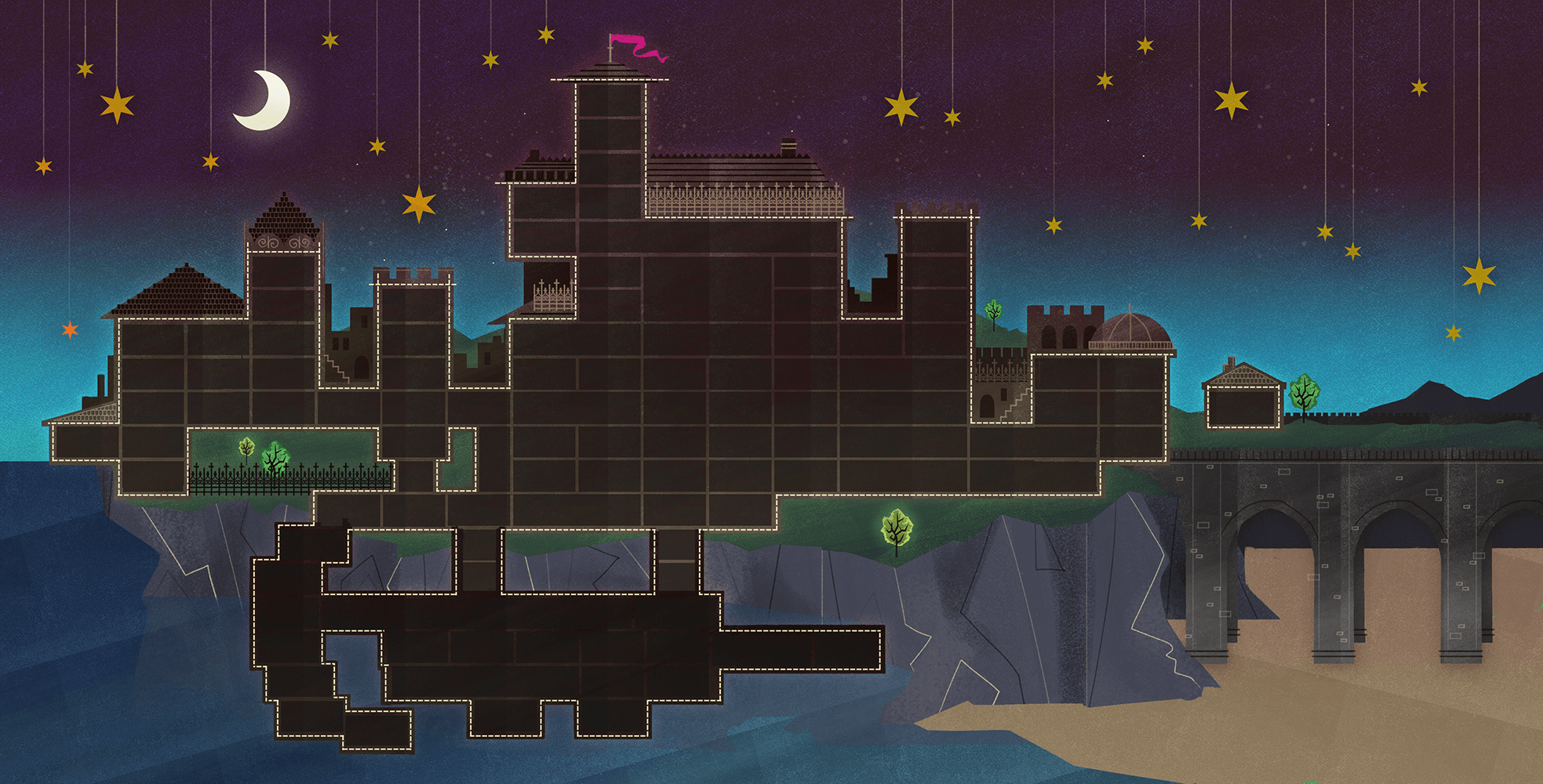 The dark rectangles are, of course, where all the rooms go, and you’ll unlock them sequentially by unlocking a room before them. Hush House has been gutted by a fire, so each room will need a specific set of resources to fix them up before you can use, furnish and capitalise on any resources contained within them. AK came up with the truly horrifying idea that in the later game, when you’ve worked your way through the building to Brancrug Gaol on the left, you could even unlock rooms with people (could they possibly be people?) still walled up inside…

But sunshine flowers kittens springtime this is a NICE GAME remember! Not like mean ol’ Cultist Simulator though come on that bit about putting people in the cupboard is still very funny.

Anyhoo, I leave you with a reminder that Cultist is 40% off in Steam’s Autumn Sale and GOG’s Black Friday Sale, and everything in the merch shop (including The Lady Afterwards boxes) are 20% off for Black Friday. Tune in next week for the Sixth History licence reveal, our subreddit AMA on Thursday, and more BoH work. This game is my favourite game I’ve ever worked on – I hope we do you proud next year. 🙂

2 comments on “Hath each Star, its Seven Names. Observe that these Names are Never Shared.”

on “Hath each Star, its Seven Names. Observe that these Names are Never Shared.”