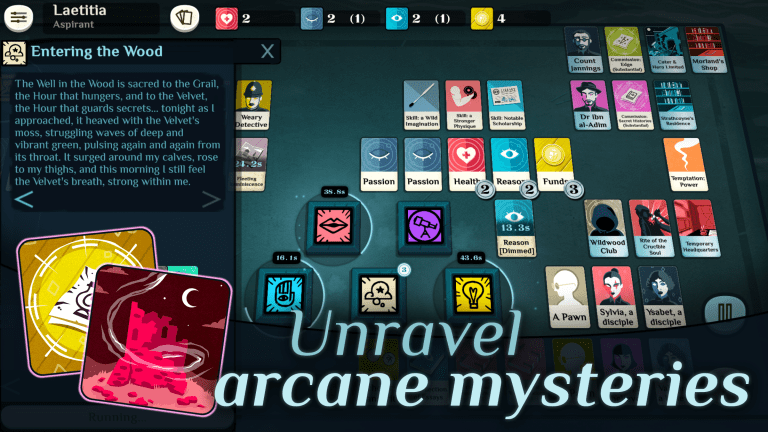 Happy end of sprint, Beloveds! I open this update with a vile crime: the Case of the Ravaged Yums. Gotta watch out for mounting, Damning Evidence, like, er, COMMITTING A CRIME IN FRONT OF SOMEONE WITH A CAMERA.

I should also say early on that we have a V GOOD APP STORE sale on right now, offering 50% off on Cultist Sim until Tuesday 27th August. So iOS people, if you ain’t got ur cult on yet, now is a really good time. Also, we finally got some featuring on the US App Store. SO THEY DON’T HATE US! YAY.

Meanwhile, Alexis tripped off to Krakow and Berlin. He spent some time doing an ‘inspirational lecture’ and ‘expert mentoring’ at Write the Game V4, a summer school for up-and-coming game devs in Krakow. He then took the train up to Berlin and spent eight hours straight talking at designers in the Ubisoft studio there as part of a knowledge exchange. Thanks for setting that up, wonderfully-named Yves Le Yaouanq! Alexis sent me a picture of a hideous gold Dolce & Gabbana SMEG fridge, but otherwise seemed to have a bally good time.

On his return, he worked on some more BoH lore, developed a fever and drew this. So there we are.

Claire tripped similarly off to an amazing-sounding holiday in Japan, where she failed to be melted by the sun or eaten by snakes. This makes her at least Exalted, if not a cult leader in her own right. Now she’s back, she’s working on a pretttty cool WF event coming (hopefully!) before the end of the year, as well as managing various Cultist Sim sales, Chinese loc and BoH Kickstarter prep. Marketing is nuts.

Hannah published her first Weather Factory blog on her BOOK OF HOURS prototype so far, as well as turning that same prototype into a living, breathing, probably haunted facsimile of Catherine Unger‘s glorious concept art. I can’t share all the concept art yet – you gotta watch our social media countdown to the KS for that – but here’s a peek at her work in progress.

Marc’s been working on the secret project of which I cannot speak, which makes it a little more difficult to sing his praises publicly. I can say at least that he’s been working on a DLC page revamp to help sell Dancer, Priest and Ghoul, and that he, like Claire, are doing great work behind the scenes which isn’t fairly represented in the public eye. So… raise a glass to them.

Finally, we finished our BOOK OF HOURS Kickstarter page this sprint, including our (human-centric, aka a bit janky) KS video. I’m sad to say that Claire’s starring role in its intro had to be replaced, partly because of the black bar on the right I couldn’t get rid of, but mostly because I thought she might scare America. We will remember u, Old Edit Claire. <3

..and, that, well, next sprint we ACTUALLY LAUNCH THE BOOK OF HOURS KICKSTARTER, which is perhaps slightly more important. Keep all your fingers crossed, and tell everyone you can think of about it.