Happy Friday, peeps! We’ve stopped doing our fortnightly sprint updates (please tell us in the comments if you’d like us to start doing them again), but we have lots of irons in the fire and I thought it’s high time for me to give you an update. So here’s what’s coming up in the next chapter of Weather Factory: Still Not Doing the Visual Novel We Made Up In 2018.

TLDR: it bork, we soz

As you may have seen, AK revamped the entire Cultist Simulator code base (to make it more stable, and to prep for BOOK OF HOURS), nearly had a nervous breakdown because coding is not what he likes best, released what we professionals call a ‘buggy AF’ update in March, and has since pushed a patch a week to put the fires out. [Now I’m doing a patch a week. In the first two weeks I pushed a patch a day. – AK] All while also developing a second game on top and agonising which doublet to wear in Witcher 3.

His latest update was Tuesday: read for experimental multi-select and snippet-saving! He’s now working on improvements to the new card placement system, which has a few weirdnesses and bugs, and is by far the most annoying thing still going wrong in the live game. We’ll update ASAP when that’s ready to go out.

TLDR: prototype in May!

To be totally honest – we usually pride ourselves on being good at production and hitting deadlines – our plans went rather sideways on this one. We’ve had some problems as a studio over the last few years, and dealing with them meant AK almost burned out, couldn’t work as usual, and I had to come up with projects I could do primarily on my own in lieu of making our lovely library game about peace, melancholy and satisfaction on the top of a rock in pseudo-Wales. But we really are still making this game (!) and by the end of May we expect to hit prototype, showcasing the central game loop. Huzzah!

We’ll be inviting a small number of people to test the game then, so make sure you’re signed up to the mailing list if you’d like to see an early first pass of the game.

In the meantime, have a look at what we’ve been up to! Starting with UI, which we’re trying to base as much on Cultist Sim as possible but updated with hard-won experience and, frankly, a leather grimoire-y vibe. Here’s what we’re working with so far in your main Librarian window:

Familiar but different, right? But unlike Cultist’s approach – where the UI is the same whether you’re taking a tincture of opium with the Dream verb or sending a Hint to murder Connie Lee – BOOK OF HOURS needs a bunch of complementary but different UI for different moments in the game. Cultist’s square verb tiles, for example, will be replaced in favour of real-world interactable locations like desks, gardens and ovens. Clicking on these open different recipe windows where your items and intangibles can be used, and where you can (possibly? probably?) store items. So you’ll click on your librarian’s desk to open the ‘Library Desk’ window, for example, and it’ll reflect that it’s a different interactive point in the game with slightly different UI. Here’s what we’re trying right now:

You might remember that BOOK OF HOURS is a melancholy, lonely game about managing a crumbling antique library of esoteric books and we want it to feel like a hygge, isolated escape from the world, where you can curl up with your cat and some marginalia while the rain gently patters the lead-glass of your study window. One of the best ways to evince a feeling like this is to occasionally – OCCASIONALLY – have someone visit you to pierce that loneliness, and make you feel it all the more when they depart. Sometimes they’ll be friendly. Sometimes they might not. And those pesky Suppression Bureau agents have frankly nothing better to do, and like the way you make tea. So we need a basic UI dedicated to talking to these visitors, every now and then. 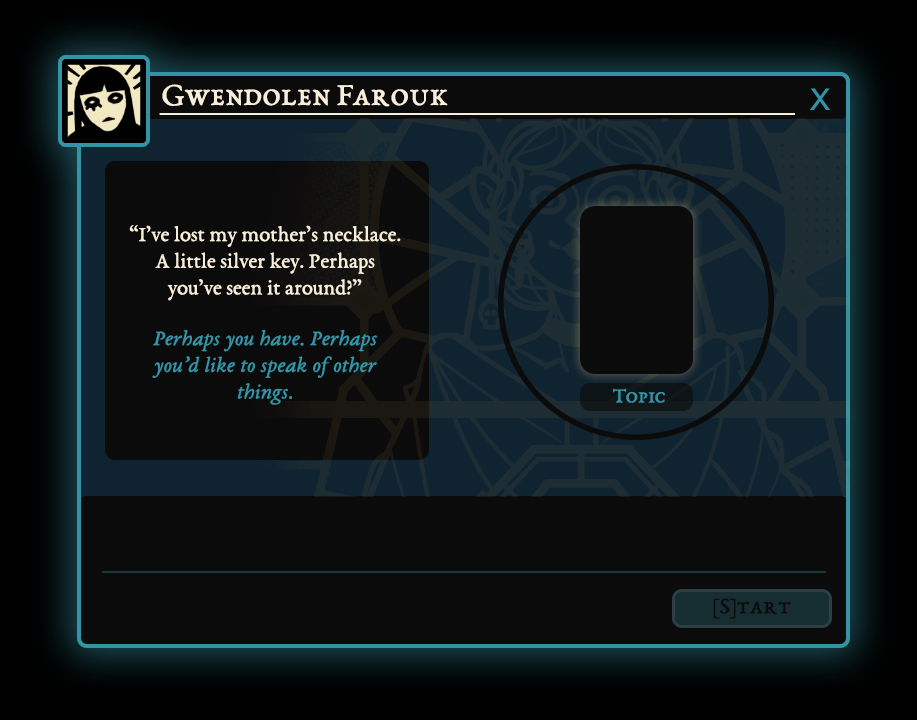 Overall, we’re working on the assumption that the zoomed-out view of BOOK OF HOURS will look something like the below. NOT the art, which is a super super early mock-up I made in 2019, but a pulled-back simulator view of the whole of Hush House that lets you see an overview of everything going on in your game, and a vaguely mechanically appropriate UI, essentially giving you a quickbar for commonly-used cards and access to a much larger menu of items, skills, attributes, etc. You’ll be able to zoom in to see detail and do small, specific tasks like personally ordering your books on your bookshelf. (Please note, if AK sees anyone ordering their books by colour he is likely to cry EHEU and delete all the code). 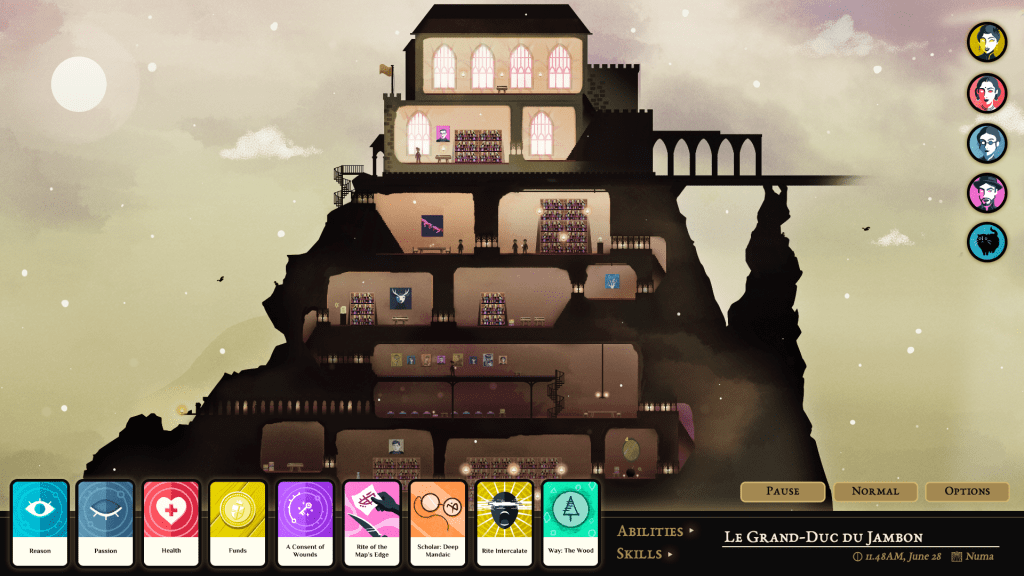 To make the prototype look even slightly like the final game, I’ve been mocking up some very basic assets to indicate relative sizes so we can answer questions like how high the ceilings shoul dbe, how many books you can put in a bookshelf, and whether we want a cosy librarian’s nook or an intimidating Smaug’s lair of occult grimoires. This is all TBD, and the art style will almost certainly change. But for now pls enjoy tiny Fuchsia’s head on a 1930s outfit inspired by President Zelensky’s war-jumper. Because why not.

I’m very keen on being able to customise characters, and have plans – but AK is sensibly undecided on this for now and gets the final say. MORE ON THIS LATER WHEN WE KNOW OURSELVES.

Speaking of letters… I’m back on my boxy bullshit!  I’m releasing 25 special, limited edition library-focused boxes each month from May to August to mark That Damned Library Game’s prototype, sold via our Etsy shop. You might have seen this photo from our last newsletter: 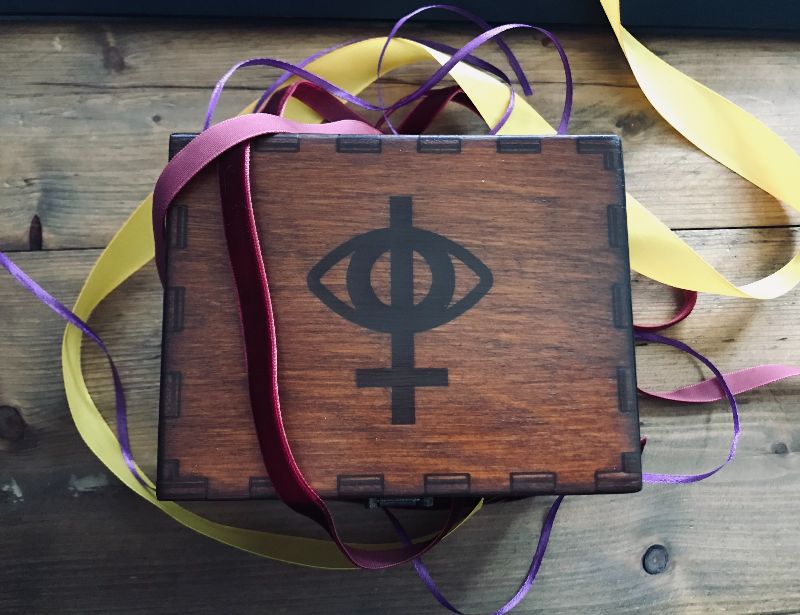 This is the prototype for May’s box, from the desk of the librarian of the Grove of Green Immortals, the mountain-monastery of renegade Taoists specialising in horticulture and medicine, in Moth and Heart lore, under the hand of the Applebright. We’re working with a totally brilliant artisan who’s hand-carving each box, which will then contain something like the following: 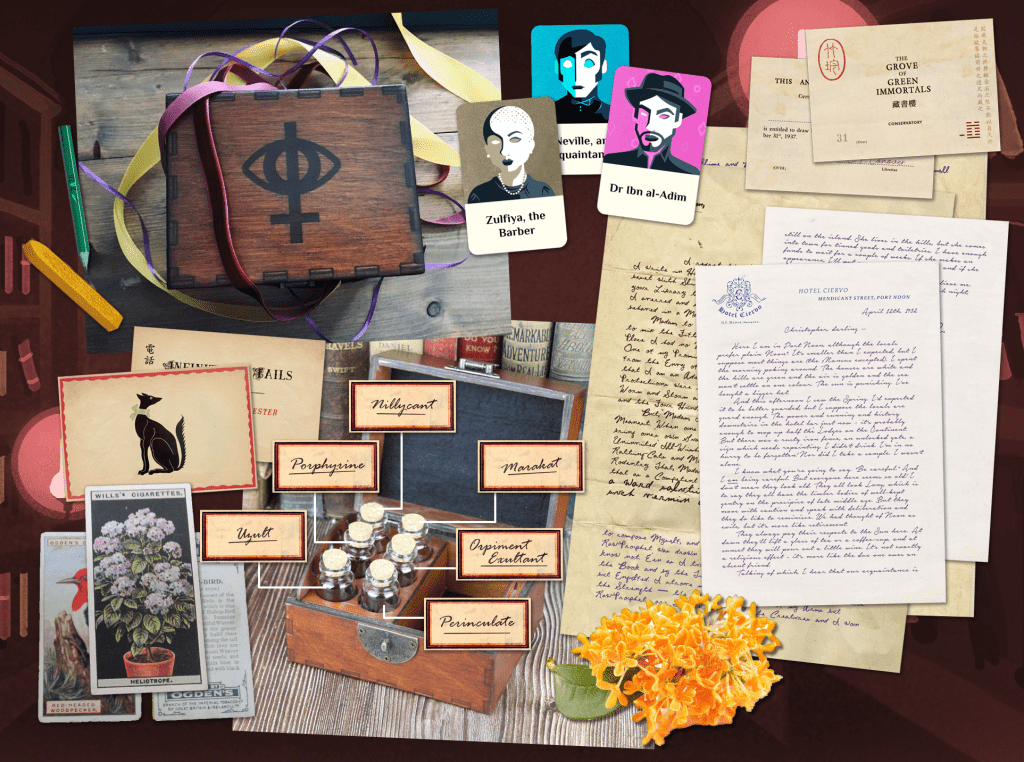 There are inks in which histories are written, and inks which protect against untruth. There are inks which can only be read by night, and inks binding the author to the one whose name is written. And then there are inks of which the Hours take note – and inks that are forbidden. So every box will contain a highly restricted sample of six: uzult, porphyrine, nillycant, perinculate, marakat and the Orpiment Exultant (mixed by the fair hand of your resident apothecary, me).  [As WFCAT aficionados will know, one of these things is not like the others. – AK] They’ll look a bit like the Cultist Simulator launch present I made AK, which lots of people kindly asked if they could buy but I can’t make it work as a product: 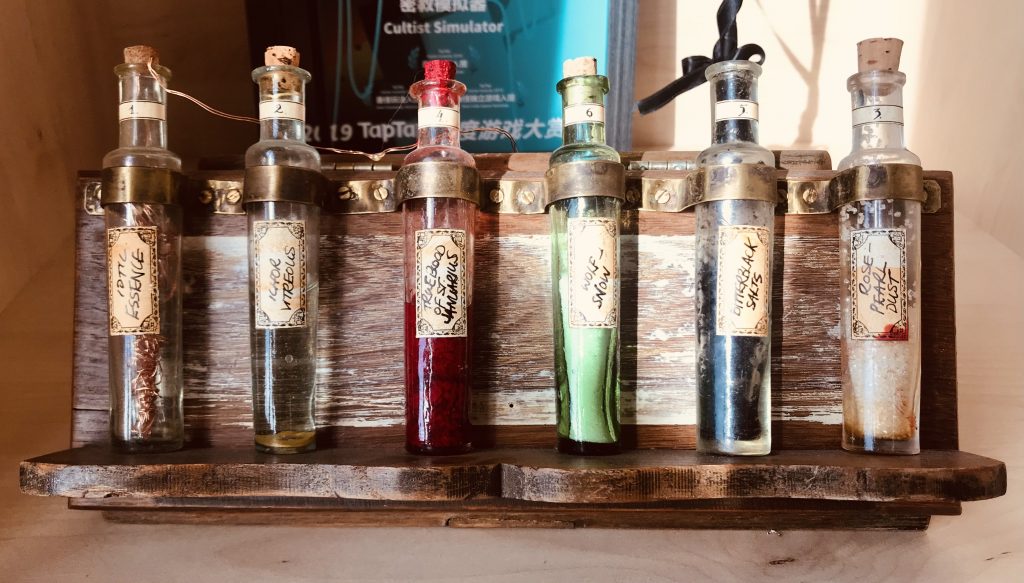 Each box will also contain a unique collection of visitors, calling cards from notable guardians of the library, a library membership card, genuine 1900s-1930s sealing wax and ephemera and a couple of letters, among other things. Each box has a particular affiliation with a guest, who’ll appear in every copy of that box. In the Grove’s case, it’s Zulfiya the Barber. You might be able to guess the two of the three other libraries from their main guest, perhaps…?

And some of these guardians you’ve heard of. Any idea who these cards are from? (In reality, each of these will be gold-foiled – so imagine them being shiny and impressive.)

We’ll announce each box at the end of the month when it goes on sale on Etsy, along with a design update on BOOK OF HOURS from AK.

I can already hear some of you thinking: twenty-five? Only twenty-five boxes? These people are MORONS they will CLEARLY SELL OUT IMMEDIATELY! And you’re sort of not wrong. AK and I are a two-person team doing almost everything ourselves, and I nearly lost my marbles assembling, packing and sending 500 Lady Afterwards boxes earlier this year. So I’m trying to balance making fun, unique real-life items you can’t get anywhere else (like these Secret Historian boxes) with not going totally batshit managing a production line I can’t sustain. 25 boxes a month won’t make me want to throw myself into the Thames. This is good.

Against that, I do appreciate our volume limitations make it annoying for someone who logs in five minutes later than planned and finds all the boxes they’d been excited to buy have been bought. So if that’s you, fear not. Once we’ve released all four limited edition Secret Historian boxes – which we’ll advertise ahead of time, so you know exactly when they’re coming – we’ll then sell an unlimited Hush House edition, sold in batches so I don’t go nuts. This’ll make sure everyone who wants a box gets one.

Anyway, back to the fun stuff. Here’s the first batch of letters I received from our printer this morning: 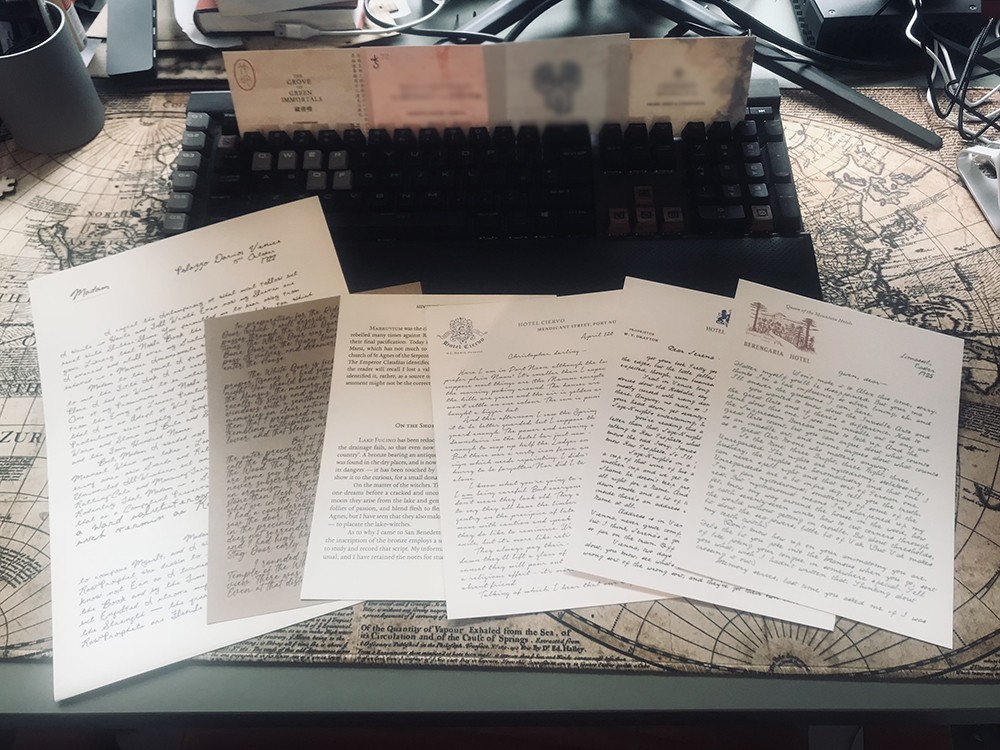 You’ve seen these letters before, though not with their nice updated designs. But there’s one that’s totally new… What do you lore-hounds make of this?

TLDR: boxed edition for sale from 31st May

As I mention above, I took on too much assembling and shipping 500 Lady Afterwards boxes on my own. But lots of people still want one, I’m delighted to say. How to square this circle? BY MAKING YER MUM DO IT FOR YOU! (But, paying her a decent wage to do so, so she can buy tulip bulbs and wine, her two major expenses.)

So we’re releasing another 1,000 Lady Afterwards: Boxed Edition boxes for sale on Tuesday 31st May 2022 on our Etsy shop. Like we did with the original runs of the Tarot of the Hours, we’ll release these boxes in tranches of 50-100 so my mother doesn’t totally lose the plot. This means if you go to our shop and don’t see any boxes available, don’t worry! We’ll restock every week – if you miss out one time, there’ll be another batch of boxes available very soon. Hopefully this’ll allow our teeny studio to provide boxes for everyone who wants one, without us having to stop doing all the other work we’re doing on actual games and becoming a physical-first TRPG store. Woot. 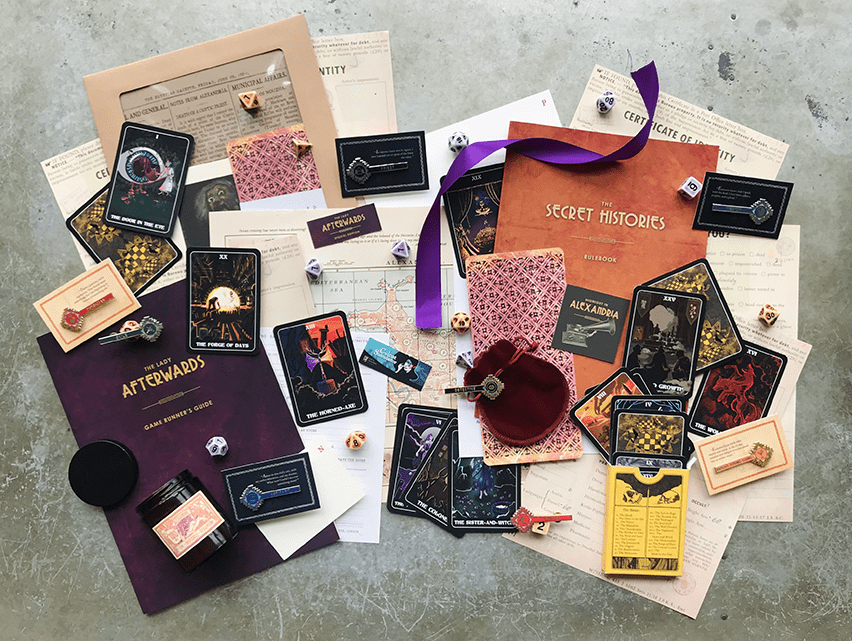 This post has gotten waaaay too long, so I’ll just say that there’ll be a separate website coming soon, with photos of all the different rooms, more info on what goes on during a weekend event, and allowing ticket purchases. We’ll announce ticket prices next week, most probably – keep an eye out! They’re pricey, because you’re buying a luxury weekend holiday in the Secret Histories, with posh nosh and Bureau agents and everything. And with everything we’re planning for Treowen they’re worth every English penny…

9 comments on A Peep into Futurity

on A Peep into Futurity