Happy Friday! Just wanted to share some finished photos of the Secret Historian boxes I’ve been trailing for a while, as I realised you haven’t actually seen them IRL and might, er, not really know what I’m babbling on about. Here’s the end result of the Grove of Green Immortals box, padded with real dried moss and pressed foliage, dusted with the Grove’s emblematic osmanthus flowers. I even set off the office fire alarm sealing the more liquid ink bottles with wax. SORRY OFFICE PEOPLE – 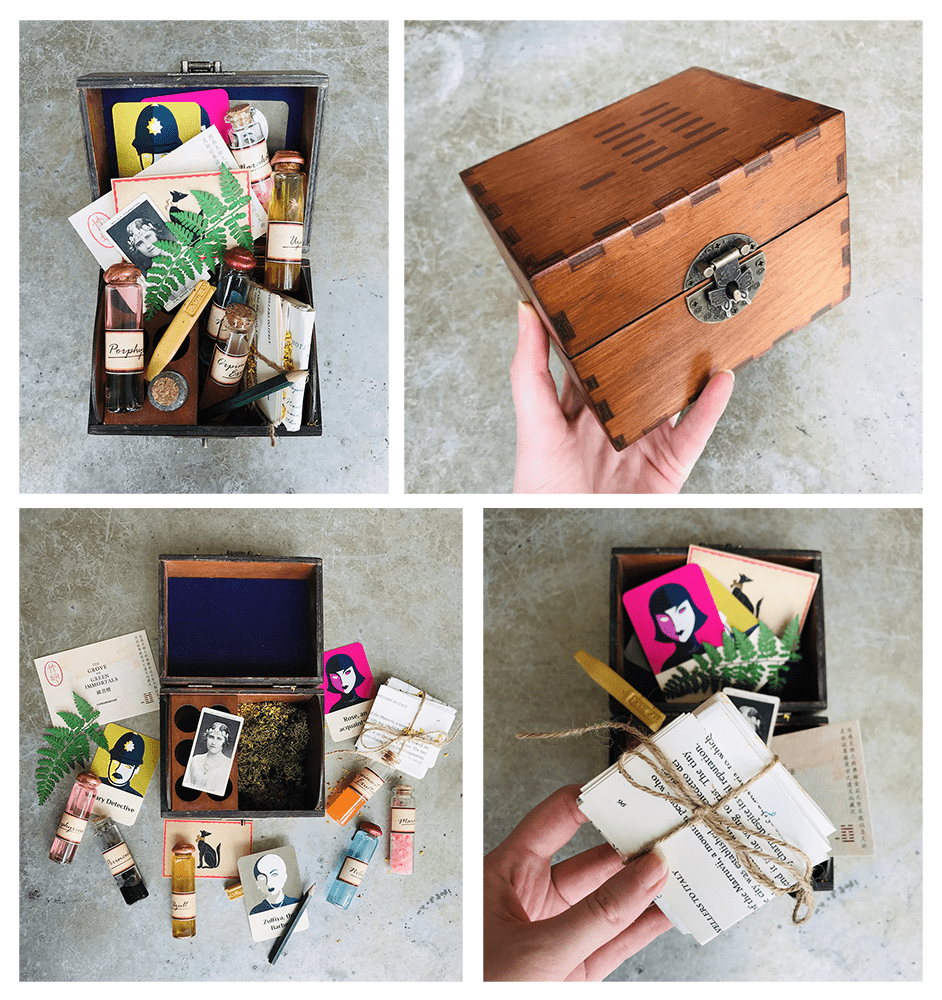 The Grove’s sign is burned on the lid, while Heart, Knock and Secret Histories aspects are carved on the hinges. Only 25 will ever be made (before I move on to next month’s box, from Crossrow), and all include variants of the following:

★ A custom-made walnut-stained apothecary box from the desk of the Librarian of the Grove
★ Six cork and wax-sealed forbidden inks: uzult, porphyrine, nillycant, marakat, perinculate and the orpiment exultant
★ Two hand-tied letters from fellow seekers of the forbidden arts (picked from a pool of eight letters, past and present)
★ Genuine 1930s librarian’s ephemera: cigarette card, mini-pencil and sealing wax
★ Dried foliage, flowers and moss from the Grove itself
★ Rare calling card from the mysterious Infinite-of-Tails
★ Three visiting character cards (from a pool of basically every Cultist Simulator character)
★ Library membership card for the Grove of Green Immortals

These go live in just over a week, on Monday 6th June in the Etsy shop, for £100 plus shipping. After we re-release The Lady Afterwards box on Tuesday 31st, that is! So… watch this space! And I hope you enjoy ’em as much as I enjoyed making ’em. <3

4 comments on The Secret Historian’s box, June edition: The Grove of Green Immortals

on The Secret Historian’s box, June edition: The Grove of Green Immortals