As any Georgian can aver, their country is the most beautiful in all the realms of Earth. So naturally when God lived on Earth, he chose Georgia for his home. And, indisputably, wine – Georgian wine in particular – was invented by God, to allow we the earthbound to visit heaven briefly. God, being a generous sort, shared his creation with his angels, and also with the Devil.

The Devil never turns down a contest. So he in turn invented the lethally delicious grape-liquor chacha, made from what remains after the wine-pressing. He invited God to taste it. God liked it enough to take a second cup. The second cup inclined him to a third. By the fourth cup, even God’s head was swimming. “To drink three glasses of chacha,” he told the Devil, “is to open the door to my kingdom. But the fourth cup opens the door to yours.” To this day, the wisest feasters drain the fourth cup quickly and move quickly on to to the fifth.

And so we come to the Monastery of the Fifth Cup, with its teahouse, its vineyards, and its triple-locked cellars. The Monastery is counted among the nine great libraries of the Watchman’s Tree, but of all the nine, its actual book collection is the smallest. “Never spoken, never stolen,” a monk will say if you ask where their knowledge is kept.

If you visit, go easy on their thick red wine. And be careful of the materteral lady you might meet in dreams, and of her perilous proverbs.

The Monastery box goes live on our Etsy shop at 6PM BST on Friday 14th October. Be there! They’re our last planned Secret Historian’s boxes – though if people miss out and really want them, let me know in the comments. We might add an unlimited Hush House box to the shop later down the line… though my next focus is ART ART ART for BOOK OF HOURS. (So much art. So much. I ded.) 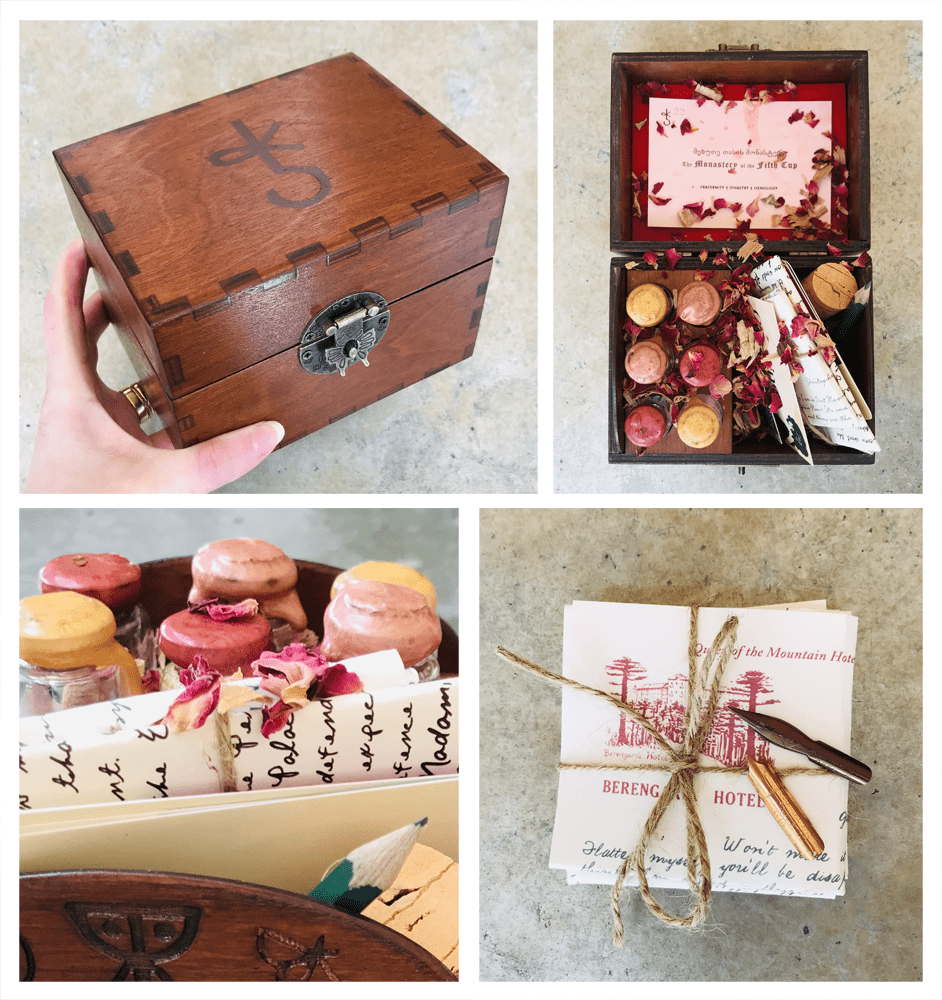 In other quick news, the Locksmith’s Dream beta runs next weekend from Saturday 15th October – we’ll share any photos of the event Ivan sends our way, and you might even recognise a familiar streamer in amongst the guests.

AK and I have done a load of BoH work this week but it’s all that annoying work that changes everything for the better but you have really nothing to show for it when it comes to, for example, updating the people who read your blog and actually want to play the damn thing. Hopefully we’ll have a juicy update to share in the near future – watch this space! 🤫

2 comments on The Monastery of the Fifth Cup

on The Monastery of the Fifth Cup