Update! Our winners for Lovecraftday 2022 are: 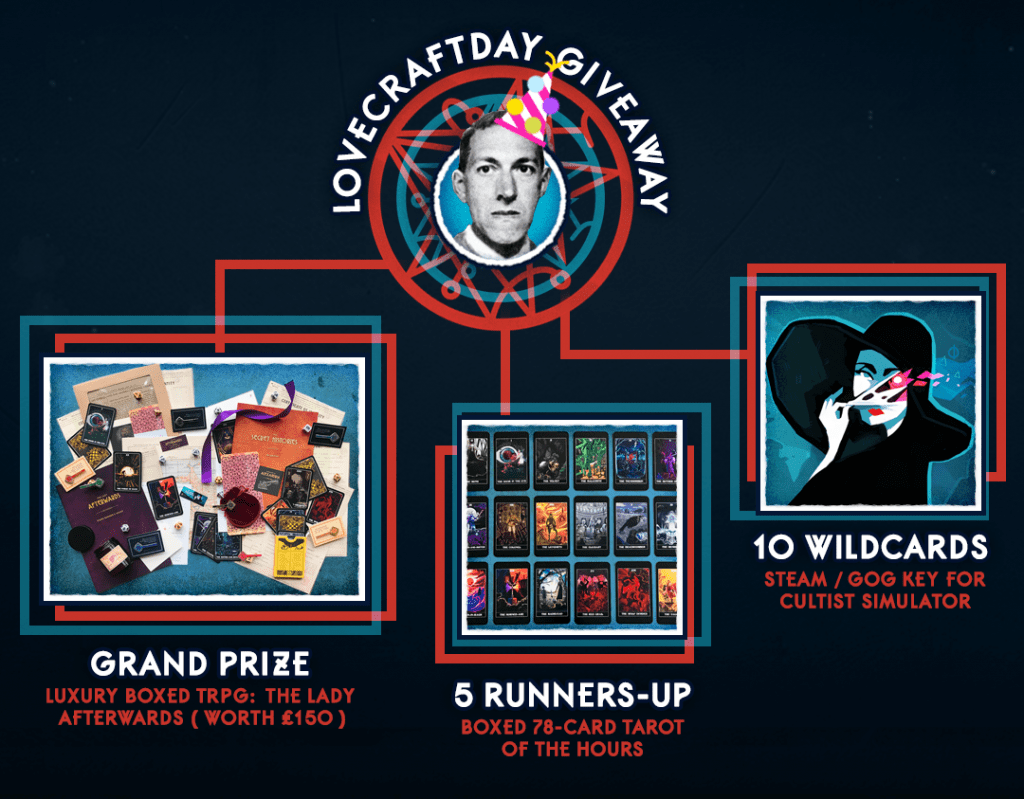 It’s BACK! H. P. Lovecraft, the godfather of weird fiction and literary influence on Cultist Simulator, was born on 20th August 1890. So we’re running a Lovecraftian giveaway until 20th August 2022 across Facebook, Twitter and Instagram – with some suitably eldritch prizes up for grabs.

To enter the giveaway on each site, you have to do two (really simple) things:

If you do everything in the table above, you have three chances to win one of our prizes. If you just choose one of these social channels, you’re still in with one shot of being picked as a winner! And because we have sixteen prizes in total to give out, you might well win something. Speaking of which… 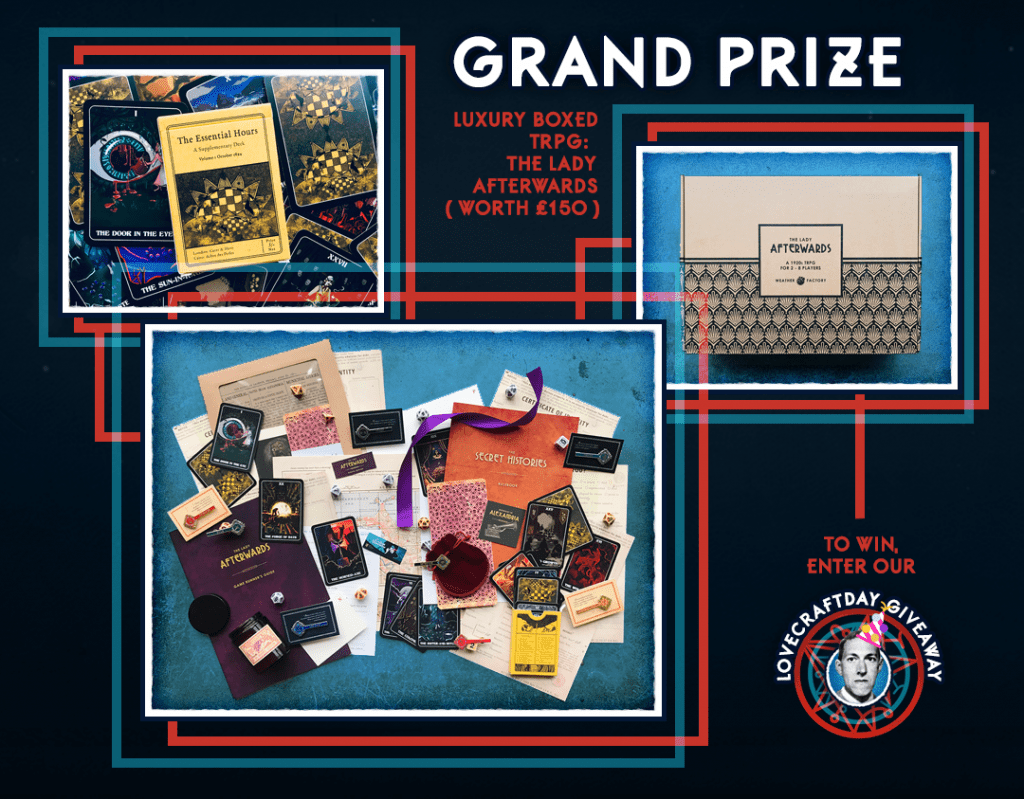 “You’ve been summoned to Alexandria, a city of coloured lights and curious histories. An old friend needs you to track down a woman. She’s probably in trouble. Probably trouble herself. Plus ça change…”

The Lady Afterwards is a Cultist Simulator TRPG for 2-8 players set in 1920s Alexandria. It takes place in the world of the Secret Histories, where hidden gods watch over a world of apocalypse, yearning and forbidden arts. It’s a non-linear, combat-light, story-centric tabletop RPG inspired by classics like Chaosium’s Horror on the Orient Express. Everything you need is included: gamebooks, clues, character sheets, dice sets and more. More info and images available here.

Runners-Up: the Tarot of the Hours 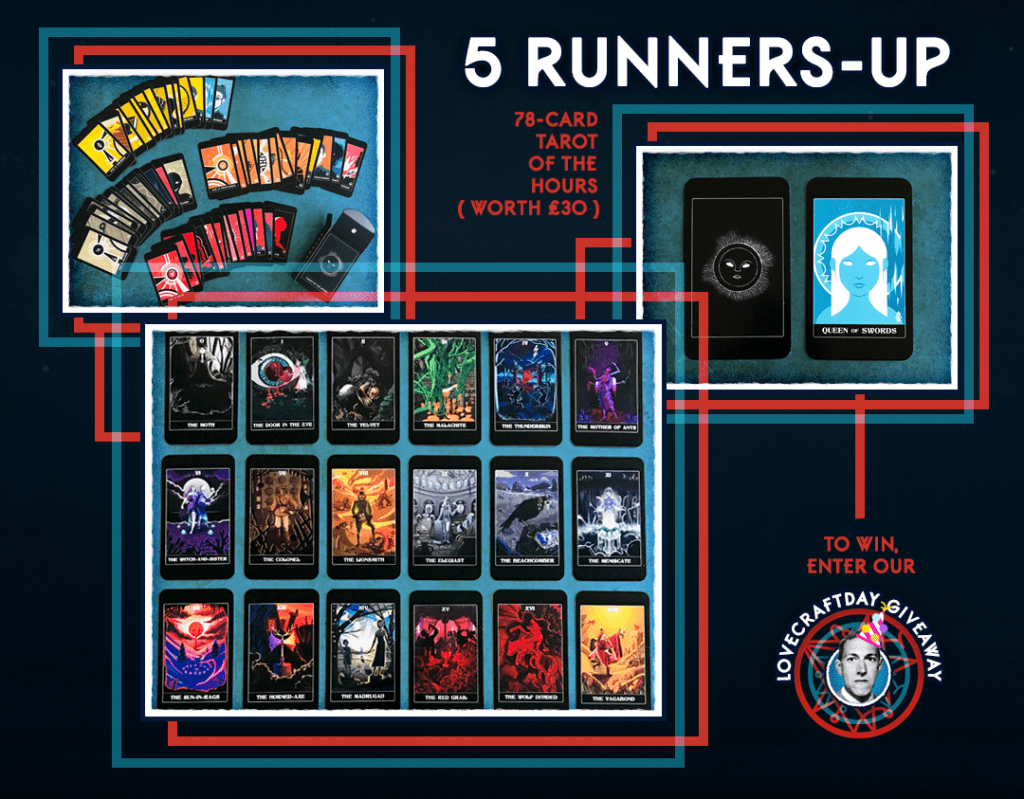 “Do the Hours speak? If they do, this may be the language they use.”

Five runners-up will get one of our bestselling Tarot of the Hours decks. Based off the traditional Rider-Waite tarot, the Tarot of the Hours uses the esoteric full-colour art of Cultist Simulator on every card and packages it up in a matt laminated tuck box. You can see more of the deck here. 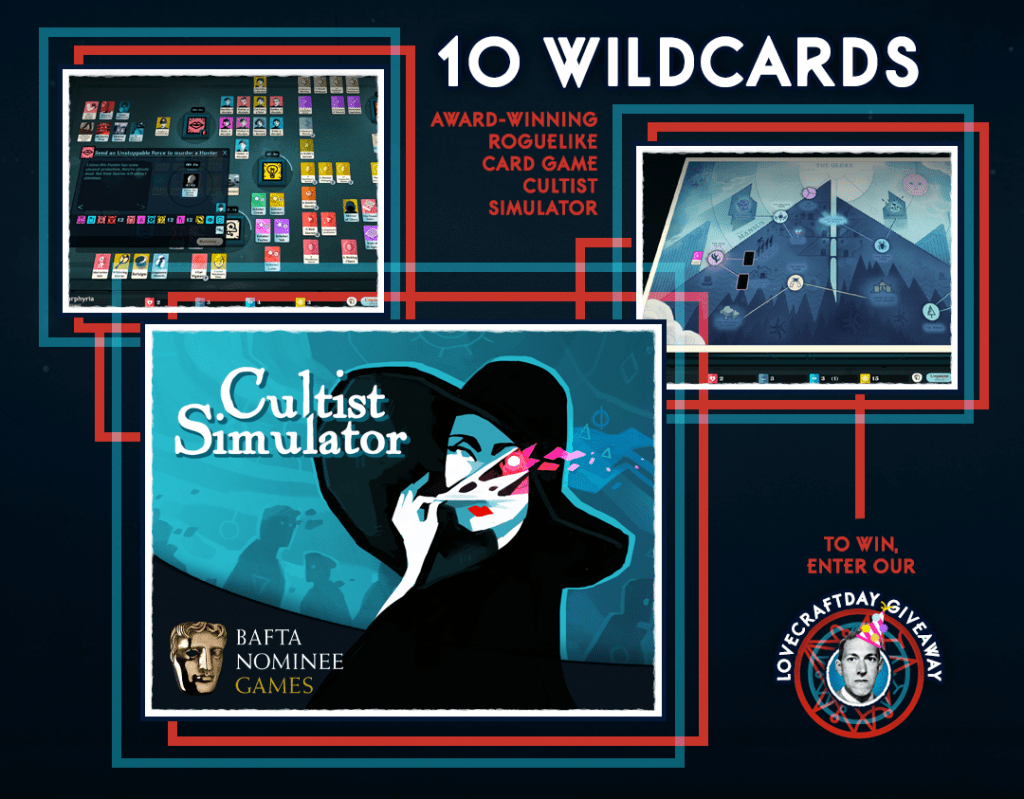 You like Lovecraft? Then you’ll probably like Cultist Simulator. Described as the single best video game at evincing Lovecraftian horror, Cultist Sim is a double BAFTA-nominated roguelike narrative card game where you start your own cult, glean snippets of the occult from the House Without Walls, and try your best not to die. 😀 😀 😀 😀 😀

Sixteen people will be picked from entries across all social channels, and

When do entries close?

When will the winners be announced?

Early in the week beginning Monday 22nd August 2022. You’ll be contacted directly if you win, and we’ll announce winners on all our social channels too.

Can I enter multiple times?

I don’t have social media! Can I enter some other way?

I’m sorry, you can’t. 🙁 This is a specifically social-media-related giveaway. You can always check out our merch shop instead, though!

Please tell me legal stuff so you don’t get sued